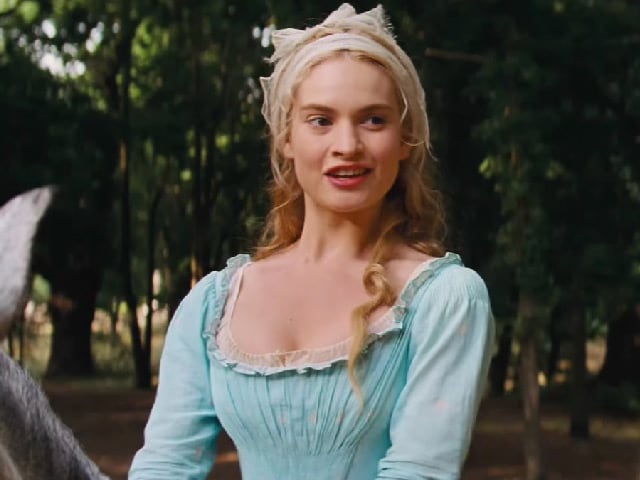 Lily James in a still from Cinderella.

Los Angeles: For her role as Ella in Disney's forthcoming movie Cinderella, actress Lily James prepared herself by indulging in yoga as well as reading on people like Mahatma Gandhi, known for his non-violence movement against British rule.

In a promotional interview for Cinderella, which releases in India on March 20, Lily has opened up about how she prepared for her role as Ella, who, even under the cruelest of circumstances, manages to maintain goodness, purity and positivity.

"I started taking horse riding lessons six weeks before shooting began, and I tried to start living healthily, doing a lot of yoga to try and get the kind of posture and grace and elegance that Ella would have had. I also did a lot of research on spirituality and read up on people like Mahatma Gandhi who have been able to deal with life in a way that I knew I never could. But I wanted to make Ella seem as real as possible and didn't want to just play that state," said the actress, known for her role as Lady Rose in the show Downton Abbey.

The story of Cinderella has been told and retold over the years. So what makes her movie different?

"What's different about our film is that the characters and storylines have really been beefed up, and it's not just about Cinderella being rescued by a prince, but it's about two people who are perfect for each other, who are going to have courage in being kind together and who are going to be very happy together," she said.

Also, the idea of playing a "princess" seemed "magical" to Lily.

"It's a dream role because Cinderella is so special and kind and unique. Plus, we have a great opportunity to create a whole life beyond the fairytale, which is already so beautiful as it is, but making it richer and giving each character their own specific back stories.

"I liked the fact that Ken Branagh (director Kenneth Branagh) wanted to keep it light and magical, much like a fairytale," she added.

However, she admits "it was a little terrifying" to play the role at first.

"Everyone has their own perception of 'Cinderella' - whether it's from the animated film or from the storybooks, so you have a big act to follow," she said.

Promoted
Listen to the latest songs, only on JioSaavn.com
What made the experience even better was Cate Blanchett playing her stepmother.

"Cate Blanchett is one of my favourite actresses ever, so I was very excited. I feel so lucky to have had the chance to work with her. She's just so incredible to watch, so incredibly alive and versatile."