How Lovely Is This Pic Of Actress Tanuja With Daughter Tanishaa?

Tanuja and Tanishaa Mukerji are currently holidaying in Andaman 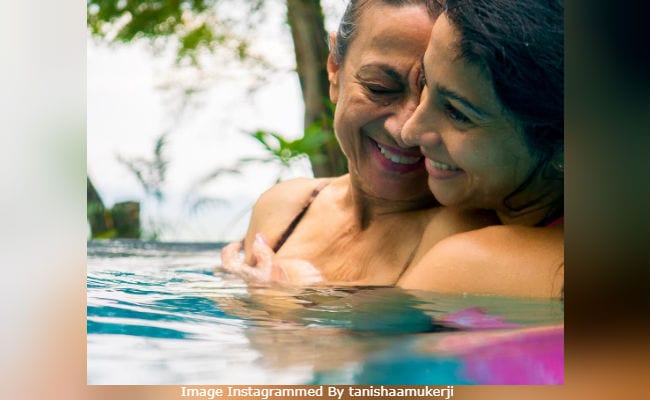 Tanishaa Mukerji, currently holidaying in Andaman, shared a set of pictures of herself with mother Tanuja, a veteran actress, on Instagram. The photos feature the mother-daughter duo in a pool and they hug each other and smile for the perfect shot. Tanishaa shared the picture by quoting a few lines from Rudyard Kipling's poem Mother o' Mine, published in his 1892 book The Light That Failed. "Mother o' mine, O mother o' mine! If I were damned of body and soul, I know whose prayers would make me whole, Mother o' mine, O mother o' mine!" she wrote, adding hashtags like 'legend', 'love' and 'mother.' "What an amazing picture" and "lovely" are some of the comments on the picture of Tanuja and Tanishaa Mukerji. "Kajol is missing," read another comment. Actresses Kajol and Tanishaa are Tanuja and late filmmaker Shomu Mukherjee's daughters.

In September 2018, Kajol and Tanishaa celebrated their mother Tanuja's 75th birthday with a grand birthday party, in which they also invited veteran actor Dharmendra, with whom Tanuja has worked in films like Do Chor, Chand Aur Suraj and Baharen Phir Bhi Aayengi.

Friends family loved ones ....... a life well spent. A deserving 75th birthday! Pre pre but not any less celebrated

Kajol is a successful actress and is married to actor Ajay Devgn. They are parents to children Nysa and Yug.