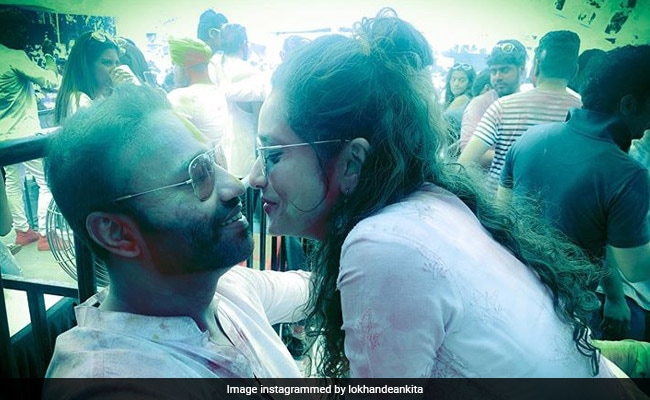 Ankita Lokhande, on Wednesday, gave us a glimpse of her Holi celebrations with boyfriend Vicky Jain and it is setting new PDA-goals. The 35-year-old actress posted a picture with her boyfriend Vicky where they can be seen wearing white outfits that have been smeared with colours as they look into each other's eyes. Sharing the picture from their Holi celebrations, Ankita wrote, "Cheers to the colours of love." Ankita, who fills up her Instagram with adorable pictures with her boyfriend Vicky, also shared another loved-up memory where they can be seen posing with tinted shades and smiling with all their hearts. Have a look at both the Holi posts by Ankita here :

Cheers to the colours of love

Happy holi everyone from us to all of you @jainvick

Ankita Lokhande, who made her debut in Bollywood with the 2019 period-drama Manikarnika: The Queen of Jhansi, frequently posts pictures with her boyfriend Vicky on her Instagram. Have a look :

He walked in to my heart like he always belonged there, Took down my walls and lit my soul on fire

Happy birthday to you Mr.jain wish to make ur today and every day of ur life very special .. truly yours and only urs #happybirthdayvikki @jainvick

Ankita became a household name after she portrayed the role of Archana in the television show Pavitra Rishta beside Sushant Singh Rajput. Ankita and Sushant started dating during the show and parted ways in 2016.

On the work front, Ankita had featured in television shows such as Ek Thhi Naayka, Shakti - Astitva Ke Ehsaas Ki and Bigg Boss 13 among others. She was last seen in Baaghi 3 which stars Tiger Shroff, Shraddha Kapoor and Riteish Deshmukh in pivotal roles. Directed by Ahmad Khan, Baaghi 3 opened in the theatres on March 6.