In the viral video, Hina Khan can be seen planting a kiss on Priyank Sharma's cheek 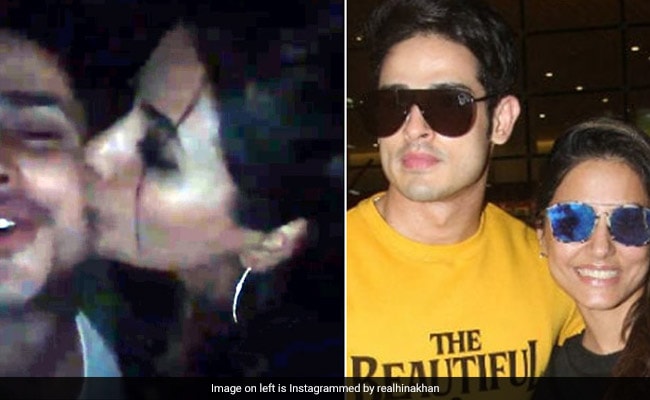 Television actress Hina Khan celebrated her close friend Priyank Sharma's 26th birthday on Friday and the duo had a blast. From birthday cake to dance party, the Kasautii Zindagii Kay actress shared several photos and videos from the birthday bash on her Instagram stories. However, there's one video among all, which went viral in no time, courtesy - Hina Khan's adorable cheek kiss. In the viral video, Hina Khan can be seen planting a kiss on Priyank Sharma's cheek and Priyank can be seen saying "I love you." Hina Khan and Priyank became good friends during the eleventh season of Bigg Boss, in which the duo appeared as contestants. Later on, they also featured as a couple in Arijit Singh's music video Raanjhana.

The birthday video was re-shared by a fanpage dedicated to Hina Khan. Take a look:

In another video, Priyank can be seen all smiles as his friends continue wishing him. The guest list of Priyank's birthday party included Splitsvilla contestants Nibedita Pal, Gaurav Alugh, Akash Choudhary and Kumkum Bhagya star Naina Singh. Check out other photos and videos from the birthday party:

On the work front, Hina Khan will make her debut in Bollywood with Hussein Khan's Line. Earlier this year, she unveiled the poster of her film at the 72nd Cannes Film Festival. She has worked in several television shows such as Yeh Rishta Kya Kehlata Hai and Kasautii Zindagii Kay . Hina has also participated as a contestant in reality shows like Khatron Ke Khiladi 8 and Bigg Boss 11.