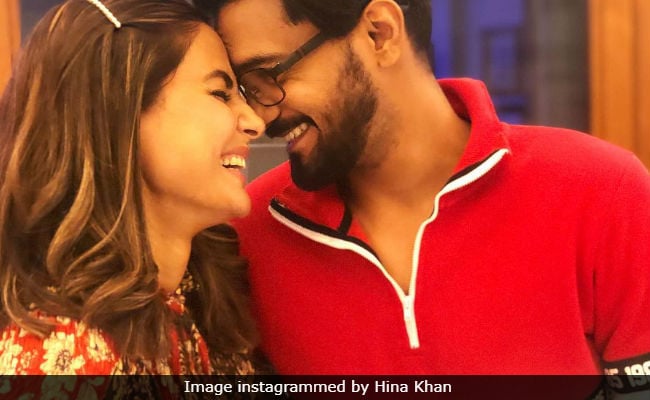 Hina Khan and her boyfriend Rocky Jaiswal are sharing loved-up pictures on Instagram, which is making their fans say, 'Aww-dorable.' Hina Khan, who currently plays Komolika in Kasautii Zindagii Kay, instagrammed a picture of herself with Rocky and captioned it: "Tum ho" along with a heart emoticon. Rocky shared a series of pictures on Instagram and wrote: "Life lies between the pictures and I love living it with my life." Hina Khan and Rocky Jaiswal look absolutely cute in the pictures which their fans are totally going gaga over. "Together forever," wrote a fan in the comments section while another Instagram user added: "You both are just made for each other."

Hina Khan, who is best known for playing Akshara for seven years in television show Yeh Rishta Kya Kehlata Hai, returned to the small screen with Ekta Kapoor's reboot of Kasautii Zindagii Kay, in which she plays principal antagonist Komolika. The character was popularised by Urvashi Dholakia in the Nineties. Kasautii Zindagii Kay also stars Erica Fernandes and Parth Samthaan as Prerna and Anurag, respectively.

After quitting Yeh Rishta Kya Kehlata Hai, Hina Khan tried her luck with reality shows. She first participated in Khatron Ke Khiladi and then in Bigg Boss 11. She was the first runner-up of Bigg Boss 11 while the winner was her nemesis Shilpa Shinde. After the reality shows, Hina Khan featured in two short films and she recently completed the shooting of another film, co-starring Farida Jalal.