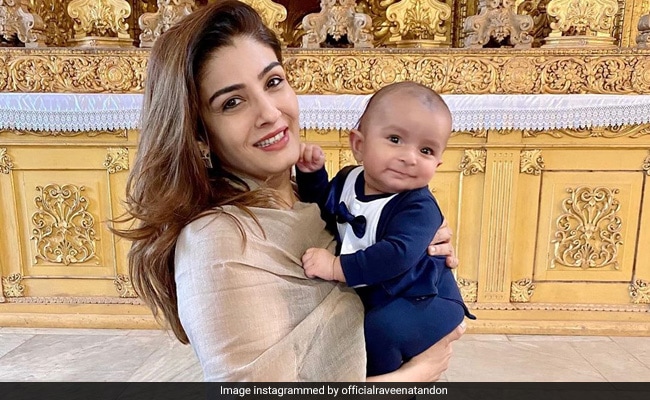 Raveena Tandon gave a very special gift to her foster grandson Rudra for his baptism. The 45-year-old actress got the casting impressions made of Rudra's hands and feet. Casting artist Bhavna Jasra, who has made mementos for Deepika Padukone, Ranveer Singh, Kapil Sharma's daughter Anayra and many other renowned personalities, shared a picture along with the actress on her Instagram profile and she wrote: "Raveena Tandon gifted her foster daughter Chaya Malaney a beautiful hand and feet casting of her son Rudra. Raveena is an ardent fan of our work and has the sweetest and kindest words for us and our work."

Raveena Tandon posted pictures from Rudra's baptism on her Instagram profile and she wrote: "Some special days are made of these. The continuation of families and legacies for the baptism of my little Rudra. Fun, laughter and happiness! God's blessings always."

Some special days are made of these.. the continuation of families and legacies .. for the Baptism of my lil Rudra . Fun laughter and happiness! Gods blessings always #rudrasdayout

The Mohra actress posted a set of super cute pictures from Rudra's day out and she wrote: "Me and mine. The same expressions. Just like his glam nani."

Me and mine .. even the same expressions . Just like his glam nan! ! #rudrasdayout

Raveena Tandon's daughter Chaya Malaney married Goa-based Shawn Mendes in a Hindu-catholic ceremony in January 2016. The actress adopted two daughters - Pooja and Chaya in the 1990s when she was a single mother. She later married film distributor Anil Thadani in 2004. The couple are parents to a daughter named Rasha and son Ranbir Thadani.

On the professional front, Raveena Tandon featured in the Kannada film K.G.F: Chapter 2, starring Yash, while her last Bollywood film was Shab, which released in 2017. In the same year, she starred in Maatr. She also featured as one of the judges in the ninth season of the dance reality show Nach Baliye, along with choreographer-director Ahmed Khan.