"The more scandalous the headlines, the more they would sell," wrote Raveena Tandon 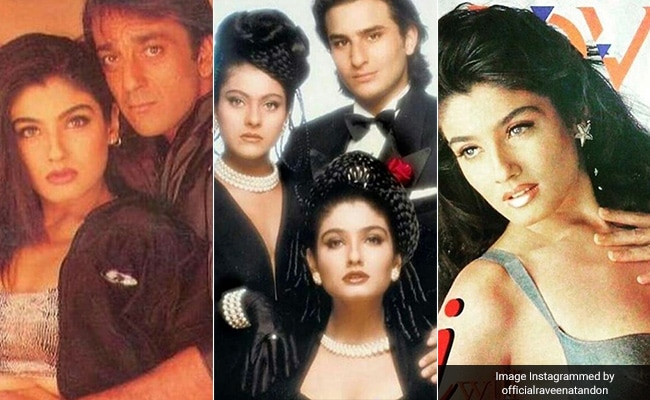 Bollywood in the Nineties was quite interesting, what with the quirky magazine covers and "scandalous headlines" and who would know about that facet of media better than Raveena Tandon, who was among the top notch actresses of that era. The reason we brought this up today is because the actress' latest Instagram post has a collection of some of the most epic magazine covers. From Salman Khan, Aamir Khan and Kajol to Karisma Kapoor, Juhi Chawla, Sanjay Dutt, Saif Ali Khan, the covers feature Raveena with some of the biggest Bollywood stars. In her post, Raveena described the Nineties as the "age of yellow journalism" and wrote: "Throwback - 90s covers then. The more scandalous the headlines, the more they would sell. The age of yellow journalism."

#throwback90s covers then , the more the scandalous headlines the more they'd,sell. the age of yellow journalism.

Raveena Tandon is best-known for her performances in films like Patthar Ke Phool with Salman Khan, Dilwale opposite Ajay Devgn, Laadla with Anil Kapoor and Sridevi, Mohra and Khiladiyon Ka Khiladi co-starring Akshay Kumar. She also featured in hit films such as Ziddi with Sunny Deol, and Bade Miyan Chote Miyan and Dulhe Raja opposite Govinda.

On the professional front, Raveena Tandon featured in the Kannada film K.G.F: Chapter 2, starring Yash, while her last Bollywood film was Shab, which released in 2017. In the same year she starred in Maatr. Raveena Tandon also featured as one of the judges in the ninth season of the dance reality show Nach Baliye, along with choreographer-director Ahmed Khan.