From the protruding nose that Amitabh Bachchan sported, to the pickle jar in his hand that he stole in the film, everything about the Amul post was on point 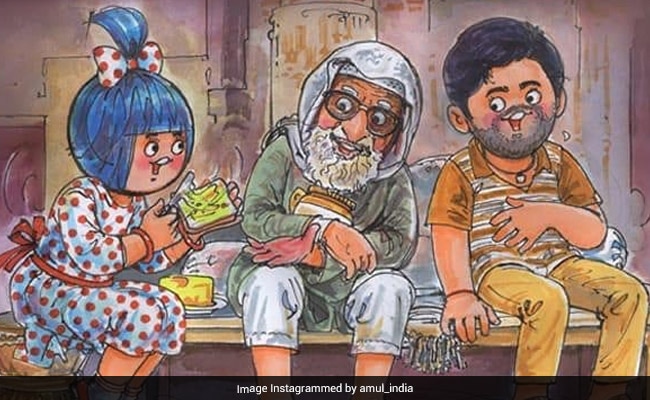 Another day, another utterly, butterly post shared by Amul. This time with a Gulabo Sitabo twist. The post features caricatures of Amitabh Bachchan and Ayushmann Khurrana's characters in the film. We are quite amazed by the attention to the details in it. Be it the protruding nose that Amitabh Bachchan sported or the pickle jar in his hand that he stole in the film. Let's not forget Ayushmann Khurrana's animated expressions. Also, we think, we spotted the beloved Fatima Mahal in the backdrop. The caption on the post read: "Bula do, khila do." Reacting to the tweet, Shoojit Sircar, the director of the film, wrote on Twitter: "Gratitude" and added a smiley.

Gulabo Sitabo is set in Lucknow. The film showcases the twisted equation of Mirza Sheikh (Amitabh Bachchan) and his tenant Baankey (Ayushmann Khurrana), and a dilapidated building Fatima Mahal - the root cause of their fight.

Gulabo Sitabo opened to largely positive reviews from film critics. Saibal Chatterjee, in his review for NDTV, gave the film, 3 stars out of 5 and wrote: "The film has parts that are a bit of a mixed bag, but the manner in which the film rides on its quirky principal premise, droll little idiosyncratic detours, the cadences of the language of Lucknow and two wonderful pivotal star turns gives it an out-of-the-ordinary veneer."