"In Gulabo Sitabo, the nature of the characters were such that we had to 'tolerate' each other a lot," Ayushmann wrote in a post 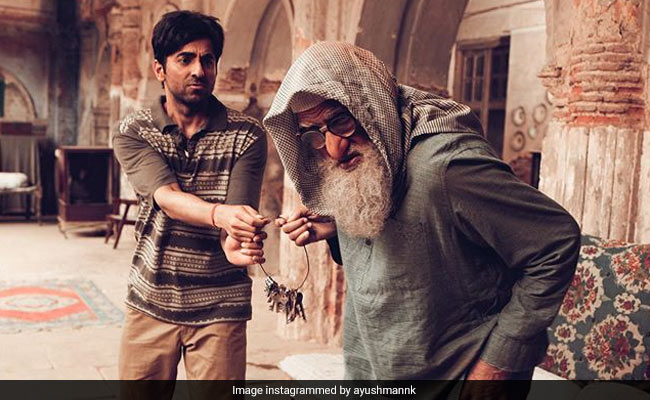 On the day of Gulabo Sitabo's release, Ayushmann Khurrana dedicated a note of gratitude to his co-star Amitabh Bachchan and also director Shoojit Sircar. In his post, Ayushmann wrote about his journey from being an Amitabh Bachchan fan and shooting his first TV project on the same location as that of Big B's song Jumma Chumma to actually working with him. Ayushmann, who couldn't describe his surreal experience of sharing screen space with Mr Bachchan in just a few words, also thanked Shoojit Sircar for casting him as Big B's co-star. Here's what Ayushmann wrote in Hindi, sharing a still from Gulabo Sitabo.

Ayushmann plays the role of Baankey, aka Sitabo - a young, shrewd, not-so-well off and hot-headed tenant, always at odds with Big B's character Mirza, the titular Sitabo, who is an aged and grumpy landlord. Referring to their never-ending exchanges in the film and their characters, Ayushmann added: "Gulabo Sitabo mein mere samne bataur kalakar yeh hasti khadi thi aur kirdaro ki prabritti aise thi ki hume ek doosre ko bahut 'sehna' padha. Waise asal mein meri kya mazal ki main unke samne kuchh bol payu. Iss vishamyakari anubhav ke liye main Shoojit da ka dhannyavad karna chahunga ke unhone mujhe Amitabh Bachchan jaise mahanayak ke saath ek frame mein dikhaya. Dada, aap mere guru hain. (In Gulabo Sitabo, standing in front of me as a co-star was this person, and the nature of the characters were such that we had to 'tolerate' each other a lot. But in reality, I dare note say anything in front of him. I would like to thank Shoojit da for this amazing experience, that he thought I was worthy of sharing the frame with a megastar like Amitabh Bachchan." Ayushmann's first film Vicky Donor was directed by Shoojit Sircar.

Ahead of the film's release, Mr Bachchan featured in headlines for his response to interviewer, who casually referred to Ayushmann as "a rising star". "Correction, Ayushmann Khurrana, is not a rising star. He is a very risen prominent star, living up to his name Ayushmann, which means long lasting, longeval." In the last two years, Ayushmann Khurrana starred in five films, all of which earned shouts outs from the audience and critics alike. In the last two years, Ayushmann's films such as AndhaDhun, Badhaai Ho, Dream Girl and Bala crossed the Rs 100 crore mark at the box office.

Ayushmann Khurrana and Amitabh Bachchan's Gulabo Sitabo had a world premiere on Amazon Prime today. In his review for NDTV, film critic Saibal Chatterjee wrote this about Ayushmann and Mr Bachchan's onscreen camaraderie: "Amitabh Bachchan is a hoot and a half as Mirza, a man who is visibly weighed down by time but refuses to renounce the world. Ayushmann Khurrana, too, coaxes the right notes from the feckless Baankey, who hides his inadequacies with a cultivated air of nonchalance. He brings alive a character you cannot but care for."