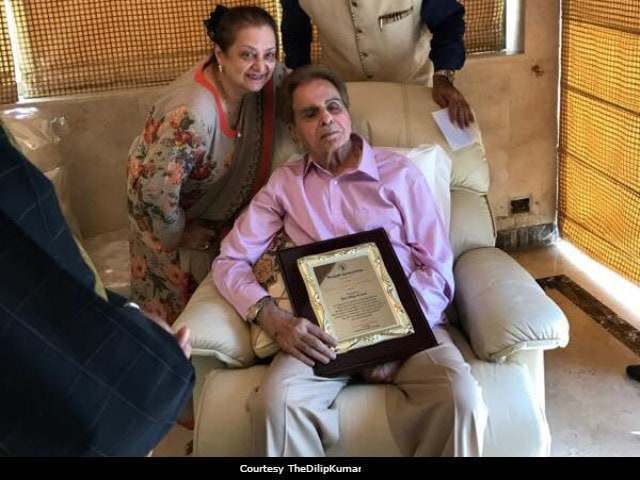 New Delhi: Veteran actor Dilip Kumar makes a comeback on Twitter with messages for his fans and pictures with wife Saira Banu. The 94-year-old actor was absent from social media as he was advised rest in December, when Saira Banu was in charge of his social media accounts. Saira Banu kept fans and followers updated about the Devdas actor's health and wellbeing. On Tuesday evening, Dilip Kumar resumed his tryst with social media and tweeted: "God's grace and your prayers with me. I am much better. Slight discomfort and an irritating back pain." Earlier this month, Saira Banu tweeted on behalf of the actor to announce that he will return on Twitter "soon."

Here are the tweets shared by Dilip Kumar on Tuesday:

Good afternoon. So good to read all these messages.

God's grace and your prayers with me. I am much better. Slight discomfort and an irritating back pain.

Dilip Kumar fans, watch his space for more updates. "I will be back on this medium, later in the evening," tweeted Dilip Kumar.

I will be back on this medium, later in the evening. Khuda Hafiz.

Earlier, Saira Banu tweeted to thank Dilip Kumar's fans and followers for their unconditional love: "Sahab believes that to be surrounded by family and friends who love him unconditionally is therapy by itself. Sahab is blessed with the prayers and love of his millions of fans, admirers, friends and well-wishers."

Promoted
Listen to the latest songs, only on JioSaavn.com
Dilip Kumar has been in an out of the hospital for the past few years now. In December, Dilip Kumar was discharged from Mumbai's Lilavati Hospital, where he was admitted for experiencing swelling in his right leg and fever.

Dilip Kumar, who received the Padma Bhushan in 1991 and the Dadasaheb Phalke Award in 1994, is best known for his starring roles in films like Madhumati, Devdas, Mughal-e-Azam, Ganga Jamuna, Ram Aur Shyam and Naya Daur.