"He Wasn't Well But Who Can Tell": Sutapa Sikdar Shares A 3-Year-Old Clip Of Irrfan Khan From Angrezi Medium Shoot

"I crave for your indulgences, Irrfan," wrote Sutapa 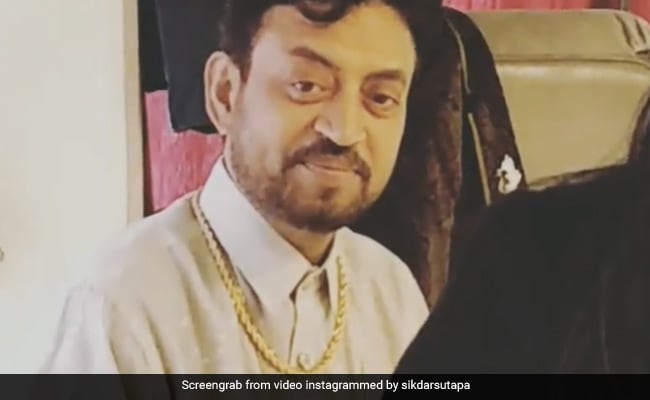 Irrfan Khan in a still from the clip. (Image courtesy: sikdarsutapa )

Irrfan Khan's wife Sutapa Sikdar, on Friday, shared an old video of the actor from the sets of his last film Angrezi Medium. Irrfan Khan died of cancer on April 29 last year. He had shot Angrezi Medium, also starring Kareena Kapoor and Radhika Madan, in India, as well as in London. In the video shared by Sutapa from three years ago, when Irrfan was undergoing treatment for cancer, the late actor can be seen watching his wife and other crew members playing cards in his makeup van and smiling. Sharing the clip, Sutapa Sikdar stated that Irrfan Khan "wasn't well" on the day the video was shot but it was hard to tell from his actions. "Three years ago with Irrfan's team in London shooting. He wasn't well this particular day but who can tell...hated playing cards but tirelessly witnessed reading his book and saw us playing even in the makeup van," wrote the actor's wife.

Irrfan Khan was diagnosed with a neuroendocrine tumour in March 2018, after which he flew to London for treatment. In February next year, he returned to India to shoot Angrezi Medium and flew back to London after a brief stay. After his treatment in London, Irrfan returned to India in September 2019. He was admitted to Mumbai's Kokilaben Hospital in the last week of April 2020 and died on April 29.

A few days ago, Irrfan Khan and Sutapa's son Babil shared a couple of photos of the late actor and wrote: "I've been working so hard man, wish you were here to witness."

Irrfan Khan was the star of films like The Namesake, Paan Singh Tomar, Haider, Maqbool, Piku and The Lunchbox.