"These two years have taught us how to stick together through good times and bad," Hazel Keech wrote 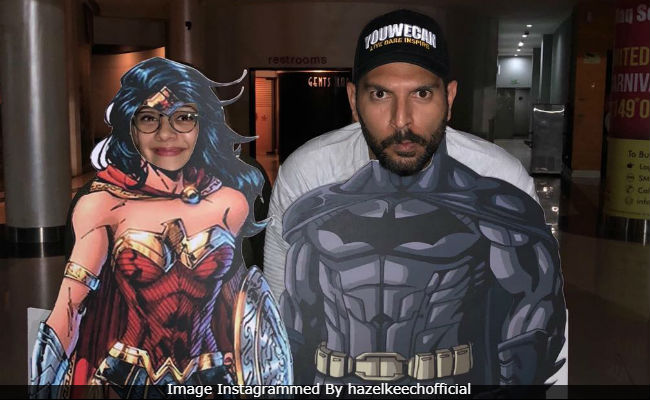 On their second wedding anniversary, former actress Hazel Keech and cricketer Yuvraj Singh wished each other with cute Instagram posts. "My partner in life and my partner in fighting crime. These two years have taught us how to stick together through good times and bad," read the first few lines of Hazel Keech's post. The picture, which was posted by her on Friday evening, features Hazel and Yuvraj behind the cut-outs of Wonder Woman and Batman, respectively. "I'm so proud of us. Happy second anniversary, Batman, love, your Wonder Woman," she added. Hazel Keech and Yuvraj Singh married in November 2016 in a Sikh ceremony in Chandigarh, which was followed by a wedding as per Hindu rituals in Goa. Their Goa wedding was a star-studded affair and was attended by guests like Virat Kohli, Anushka Sharma and others.

My partner in life and my partner in fighting Crime.... !! These two years have taught us how to stick together through good times and bad and I'm so proud of Us! Happy 2nd Anniversary Batman, love your WonderWoman @yuvisofficial

Meanwhile, Yuvraj Singh wished his biwi with a cute post which read, "We made it to two years, pulling each other's legs, standing up for each other in good and bad times. Many more to go. Happy anniversary, biwi."

We made it to 2 years pulling each other's leg , standing up for each other in good and bad times !. Many more to go happy anniversary biwi @hazelkeechofficial

On several occasions, Hazel and Yuvraj treat their Instagram followers to pictures of themselves with interesting captions. Take a look at some of their pictures here.

Hey hazzy it's your bday ! happy bday my lovely wish lots of love and happiness love you always and thanks for making me walk in this lovey weather @hazelkeechofficial

Is this Selfie Sexier because you're in it @yuvisofficial ?? (Im scared people will still vote yes) hehehe..... finally i got a sneaky sleeping selfie of you

Hazel Keech often accompanies Yuvraj Singh to his cricket matches. She has featured in Hindi film Bodyguard, starring Kareena Kapoor and Salman Khan. Billa and Maximum are some of the Tamil films on her resume. She has also been a part of reality show Bigg Boss 7. Yuvraj Singh last played in 2018's Indian Premier League (IPL) matches for team Kings XI Punjab, co-owned by actress Preity Zinta.