Hailey Baldwin, Justin Bieber Trend Again After She Tweets About Wedding Reports And Then Deletes It 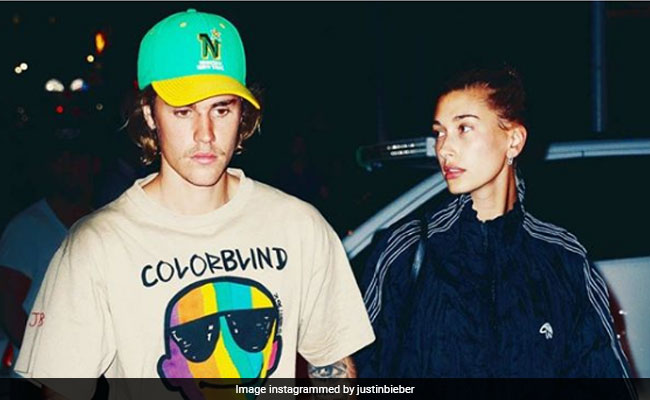 Names of singer Justin Bieber and his model girlfriend Hailey Baldwin were spotted on the top of Friday's trends list after they were photographed outside a marriage registrar's office in Los Angeles. Just a day after their wedding rumours were doing the rounds of the Internet, Hailey tweeted a clarification and wrote: "I understand where the speculation is coming from, but I'm not married yet." She deleted the tweet minutes after posting it. A TMZ report later stated that the couple will reportedly take their wedding vows next week. The report also suggests that the couple will fly out of the country for the wedding.

After Justin Bieber and Hailey Baldwin were seen outside the marriage registrar's office, TMZ shared quotes of people present in the courtroom on that day. One of them told the webloid that a teary-eyed Justin told Hailey: "I can't wait to marry you, baby," while others heard Justin and Hailey making vacation plans outside the country.

Justin Bieber and Hailey Baldwin had dated for a month before the 24-year-old singer proposed to his girlfriend over a dinner in July. Justin Bieber later confirmed that they are engaged in an Instagram post. "I am so in love with everything about you! So committed to spending my life getting to know every single part of you loving you patiently and kindly. I promise to lead our family with honor and integrity letting Jesus through his Holy Spirit guide us in everything we do and every decision we make," read an excerpt from Justin's post.

Hailey Baldwin is the daughter if The Usual Suspects actor Stephen Baldwin and graphic designer Kennya Deodato. She has featured in an episode of Saturday Nights Live with her uncle Alec Baldwin.

Canadian singer Justin Bieber rose to fame Baby, which released in 2010. He is best known for his songs like Boyfriend, Sorry and Let Me Love You among others.