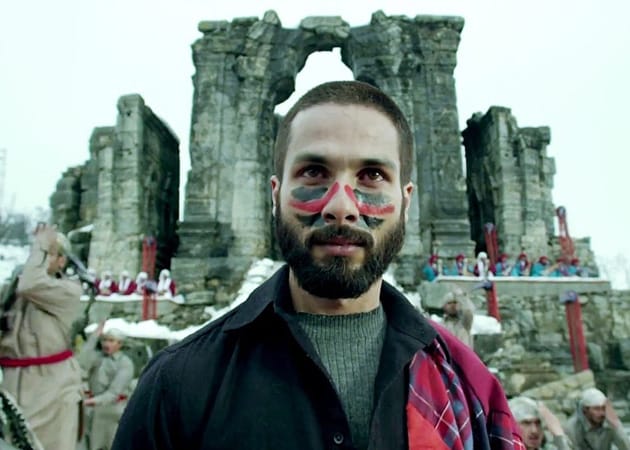 Shahid Kapoor in a still from Haider

It's a small film made with a lot of heart. Vishal Bhardwaj's Haider, his twist on William Shakespeare's tragic play Hamlet, is climbing up the Bollywood box office ladder thanks to a positive word of mouth, say experts. It has earned a cumulative Rs 13.07 crore within two days of its release.

On its opening day, Haider minted Rs 6.14 crore, and on the following day, it managed a business of Rs 6.93 crore, registering a 14 percent jump in its collections, said a source from the production team, UTV Motion Pictures.

"The film witnessed a huge jump in most of the regions, including Gujarat, Punjab, Rajasthan," the source added.

Made at a budget of Rs 24 crore, the canvas of Haider is dark and violent, but beautiful in its own way.

Set against the unrest in the Kashmir Valley, the story revolves around a man who wants to avenge his father's death. And Mr Bhardwaj, known for giving Bollywood buffs a different cinematic sensibility with movies like Maqbool, Omkara and Kaminey, has used apt locations and setting to suit the grim and gritty mood of his latest offering.

Industry experts believe Haider is performing well, and its collections are poised to grow over the days.

"It has performed really well. The film did pretty well on the first day and I believe it has only become better. The liking for the film is not only limited to single screens as the film is getting a good response from multiplex audience as well. The response for the film at our cinema chain is really good," Deepak Sharma, chief operating officer, PVR Pictures, told IANS.

Sharma said the audience is aware that it's a "very different movie", and its performances and cinematography are turning out to be crowd pullers.

"Word of mouth publicity is working for the film. I would say that the audience is not only appreciating the film because of the publicity, but due to genuine liking towards the movie," he added.

"Haider has collected over Rs 11 crore so far and it will grow through word of mouth," Thadani said, adding that the fact that Bang Bang released on the same day, has affected the collections that Haider could have managed.

Bang Bang, starring Hrithik Roshan and Katrina Kaif, and directed by Siddharth Anand, is the official Bollywood remake of Hollywood film Knight and Day. Its exotic locations, high octane action sequences and star power added an additional buzz much before the movie hit as many as over 4500 screens worldwide.

Promoted
Listen to the latest songs, only on JioSaavn.com
Haider is said to have released in around 1500 screens.

Sanjay Ghai of Mukta Arts says Haider is doing decent business. The screens have been divided between both the films, but both the films are little long. If the films had medium or short length, they would have got more screens."