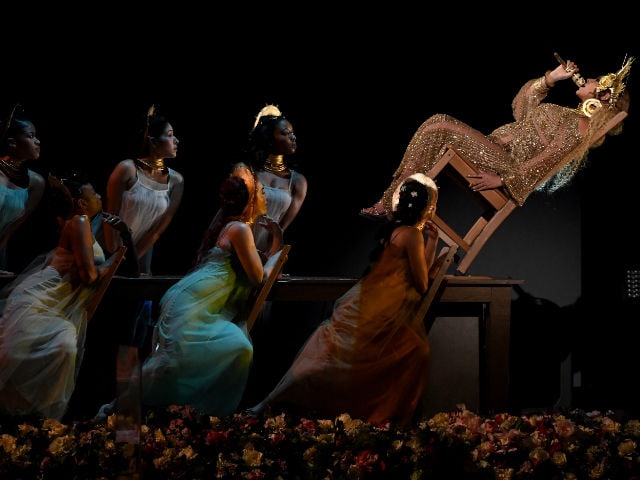 New Delhi: Even before she won her first award of the night, Beyonce had Grammys crowd and the Internet kneeling in supplication. The 35-year-old singer is pregnant with twins and made her first public appearance after making the baby announcement with a stunning performance at the music awards. Beyonce, nominated for nine Grammys this year, performed a medley of her songs Love Drought and Sandcastles, channeling ancient Egypt in a shimmering cape and a golden crown. Soon after, she won the Best Urban Contemporary Album Grammy for Lemonade. Her music video for Formation had already been awarded earlier. But it was her jaw-dropping performance that will rule the Internet for now.

Beyoncé performing at the 2017 #GRAMMYspic.twitter.com/L7oYE3uulE

The performance was in keeping with the new, edgier persona of Beyonce, who has geared her music away from the more mainstream audience of her pop hits. Beyonce chose not to play it safe, instead putting on an extravagant and abstract performance with touches of Indian spirituality and ancient Egypt.

Beyonce was introduced by her proud mother before an image of the 35-year-old singer flashed on the screen. She was also shown with her mother and daughter Blue Ivy, all in gold. The real Beyonce then appeared wearing a golden crown and flowing cape alongside dozens of female dancers, who made formations around her as they turned the stage into a sea of flowers.

But it was Beyonce's terribly well-balanced chair act which left everyone awestruck. Beyonce, queen of Grammys.

Dear Beyonce, why so fabulous? The lesser mortals of Twitter would like to know. Please help us cope.

Things Beyoncé did: THAT pic.twitter.com/NxksGbiceD

GOD IS A WOMAN AND HER NAME IS BEYONCE CARTER KNOWLES pic.twitter.com/40V3gOWB1p

That Beyonce performance was HONESTLY and TRULY a work of art. pic.twitter.com/Vmcv9pO3dV

Issac Newton Must Have Taken A Turn In His Grave By Looking At #Beyonce's Gravity Defying Performance. #GRAMMYs#BeyonceGrammyspic.twitter.com/iSBQ2LwqyQ

Promoted
Listen to the latest songs, only on JioSaavn.com
"If we are going to heal, let it be glorious," Beyonce said. She ended her performance with a glance towards her husband, rap mogul Jay-Z, and Blue Ivy, both of them beaming.