GoodLuck Jerry Review: The film benefits from the effort that Janhvi puts and the support that she gets from the rest of the cast, made up mostly of actors who definitely deserve to be busy and popular. 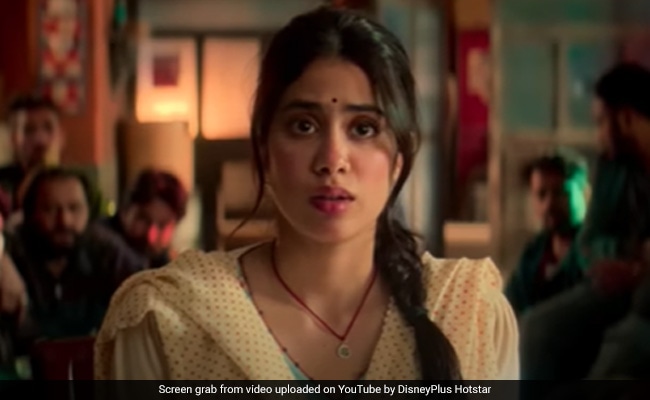 Representing a marked change of scene for the three films old Janhvi Kapoor, GoodLuck Jerry strives in vain to capture the darkly comic core of the original Tamil film (Kolamaavu Kokila, 2018). That isn't to say that the action comedy, streaming on Disney+ Hotstar, gets nothing right. One of the things that it definitely scores with is the casting of the female lead. The role fits Janhvi Kapoor like a glove.

There is much else to like in GoodLuck Jerry, written by Pankaj Matta and directed by Siddharth Sen, but not all the happy tidings that the remake hopes for materialise in entirety. Some of the film's failings are rooted in the plot tweaks it resorts to by way of characters and situations.

The crime caper sees the lead actress give the role of an ingenue caught in the dirty, dangerous world of drug smuggling her best shot. She carries the weight of the film on her shoulders with considerable panache.

The film benefits from the effort that she puts and the support that she gets from the rest of the cast, made up mostly of actors who might not be stars yet but definitely deserve to be busy and popular. They go with the flow of this jaunty, jocular film that pits the innocence of a newbie in a dog-eat-dog business against the hard-nosed cynicism of toughened criminals. They deliver moments of mirth that help offset the effects of the stretches that do not work. Comparisons with what Nayanthara (a more mature actress than Janhvi in age and experience) did as Kokila are inevitable. So is the urge to assess GoodLuck Jerry against the highs that Nelson Dilipkumar's script and direction achieved. GoodLuck Jerry isn't as consistent but it never fully runs out of steam.

Similarly, the range of emotions that Nayanthara conveyed aren't on display in Janhvi Kapoor's performance but that has more to do with how the character has been conceived in a new setting than with the ability of the actress.

The screenwriter tweaks a few key elements of the Tamil screenplay and, in the process, loses some of the buoyancy of the original as he plays up the slapstick bits. But if you haven't seen Kolamaavu Kokila, chances are that GoodLuck Jerry will more than pass muster because of its pace and sustained quirkiness.

A family from Darbhanga, Bihar - a widow Sharbati (Mita Vashisht) and her two young daughters Jaya Kumari alias Jerry (Janhvi Kapoor) and Chhaya Kumari alias Cherry (Samta Sudiksha) - migrate to a Punjab town. An animated prelude over which the opening credits play fills the audience in with details of the train ride, if not of the circumstances that led to the displacement.

One of the bogies has the words "achche din" written on it. The better days that are alluded to come, as it transpires, at a price. Having settled down, Jerry's mother makes and distributes veg momos. Jerry, on her part, works in a massage parlour much to Sharbati's chagrin.

The fact that theirs is an all-woman household is of significance because it makes them vulnerable to men in the neighbourhood who feel that the ladies are in dire need of help. How these three women, led by the unassuming but spunky Jerry, take their fate into their own hands when push comes to shove is what this black comedy revolves around.

The father had a significant role in Kolamaavu Kokila. In GoodLuck Jerry, he is a garlanded photograph on the wall and replaced by a nosey neighbour Anil (Neeraj Sood). The middle-aged man has all the time in the world and is always parked in Sharbati's home whether she likes it or not.

Sharbati is diagnosed with lung cancer. The doctor tells Jerry that the radiation therapy and chemo sessions would cost the family anywhere between 25 to 30 lakh rupees. Left with no option, the girl decides that the only way she can raise the money that she needs for her mom's cure is by joining a gang of drug peddlars and becoming a conduit between supplier and distributor.

The move triggers mayhem as ruthless men who kill at will begin to find Jerry's growing cockiness a bit hard to digest. The entire family and the neighbourhood egg-seller Rinku Khanna (Deepak Dobriyal), who has a one-sided crush on Jerry, are dragged in when the girl is saddled with 100 kg cocaine from the godown of incapacitated drug supplier Timmy (Jaswant Singh Dalal).

Timmy has a sprain in the neck. Kolamaavu Kokila spelt out the reason for the injury. In GoodLuck Jerry, it is presented without a context. As Timmy convalesces, a sudden turn of events renders him incapable of continuing to lead the operation. His boss Daler (Sushant Singh) steps in and takes over the reins.

The 100-kg consignment has to be delivered to distributor Malik (Saurabh Sachdeva). But the path from here is strewn with danger. The babe in the woods act - ekdum masoom banke rehna hain, Jerry emphasises to her mother and sister - is their shield against police raids.

But the shield is soon blown off, forcing Jerry to change her tactics and try and stay a step ahead of the drug dealers - a tough call for a novice. Parts of the adventure that ensues are eminently enjoyable, but as the film hurtles towards its climax and places all its cards on the table it strays into a zone where surprises become scarce.

GoodLuck Jerry wins half the battle with its casting choices. Janhvi Kapoor, who effortlessly slips into spirit of the character, shines bright in a film that depends predominantly on her showing. Among the other actors who grab attention are Sahil Mehta (as the chirpiest member of Timmy's gang), Jaswant Singh Dalal (playing Timmy) and Mita Vashisht in the role of Jerry's mother.

GoodLuck Jerry is a well above middling affair but as the film unfolds one cannot avoid the feeling that it could have soared higher.