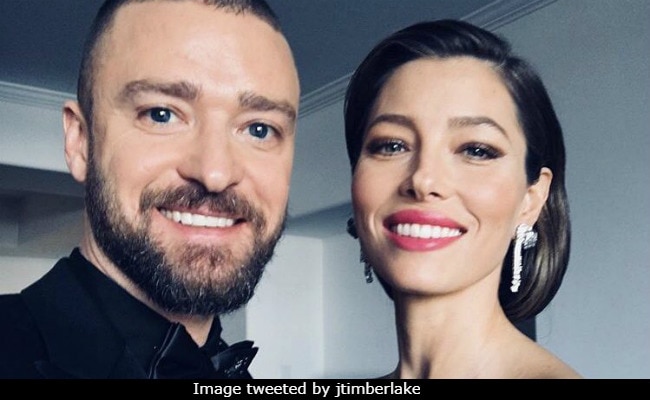 New Delhi: Operation Black on the Golden Globes red carpet was always going to be tricky to navigate - especially for those who have films on their resume with the dodgy likes of Woody Allen. For years, the filmmaker has been accused of sexually abusing his young daughter and several other disquieting allegations have emerged as well. At best, Woody Allen could be creepily obsessed by children; at worst, he's a sexual predator who has been given a free pass in Hollywood for decades. So if you are going to wear black in solidarity for survivors of sexual harassment and abuse in post-Weinstein Hollywood - AND you are going to tweet about the new Time's Up campaign - perhaps make sure you don't have a Woody Allen film on your film credits first?

Justin Timberlake was among the men who went all-black at the Globes and sported the Time's Up pin. He also tweeted this picture of himself with his wife, Globes nominee Jessica Biel, with the hashtags #TimesUp and #whywewearblack

you're literally in the new woody allen movie https://t.co/5jAElrqeFz

Here we come!! And DAMN, my wife is hot! #TIMESUP#whywewearblackpic.twitter.com/q0XWH6XR68

JT neglected to namecheck his recent film work, however. Last year, he starred in Woody Allen's Wonder Wheel - and if he hoped Twitter wouldn't remember, he was wrong.

You starred in Woody Allen's new movie. You built a career on malicious misogyny towards Britney Spears. You left Janet Jackson out to dry. This is pure performative fraud.

Hmm then why did you work with woody Allen?

You JUST worked with Woody Allen. Just stop. You're not an ally by any means.

Wearing black, good. Talking about it, good. Next step, don't participate in projects that profit men like Woody Allen. Have fun at the party. THEN keep striving for better.

He's IN the new woody Allen movie. So yeah he's not standing up at all is he

how do you justify wearing black in sympathy with victims of sexual assault while appearing in a new woody allen film?

Perhaps Justin Timberlake can find solace in the fact that he's not the only actor accused of tone-deafness. Golden Globes nominees Emma Stone, Sam Rockwell - who won Best Supporting Actor for his performance in Three Billboards Outside Ebbing, Missouri, a film on the aftermath of sexual violence - and Hugh Jackman have been in Woody Allen movies and Timothee Chalamet is in his new movie, A Rainy Day In New York, releasing this year.

wearing black means nothing if you still star in movies made by woody allen and see nothing wrong with that fact, emma. https://t.co/1mttWE8sUg

What's the year we start giving people a pass for working with Woody Allen? Sam Rockwell worked with him in '98. All the original allegations happened in the early 90s, when he also married soon-yi (ew), Dylan confirmed in 2014.

Timothée Chalamet is going to be in the next Woody Allen film. So disappointing

so instead of cancelling woody allen or boycotting his movies or even throwing his ass in jail these libtards are just gonna wear black? some of which have been in his movies? ok

so instead of cancelling woody allen or boycotting his movies or even throwing his ass in jail these libtards are just gonna wear black? some of which have been in his movies? ok

All the celebrities who are wearing black but still would willingly work with woody allen can choke. #GoldenGlobes

Golden Globes host Seth Myers went there in his opening monologue. "A naive young woman falls in love with a disgusting sea monster. I said, 'Oh man, not another Woody Allen movie,'" he said about nominated film The Shape Of Water.

Over the weekend, Grey's Anatomy star Ellen Pompeo trended for tweets in which she referred to Woody Allen as a 'fool':

I don't call it a mistake... he married his daughter...people see what they want to see or don't...Kind of hard not to see who this fool is https://t.co/g5dh8qjJBj

And while we're on the subject & I'm fired up has this fool ever put one poc in any of his movies ever?

Promoted
Listen to the latest songs, only on JioSaavn.com
Hours before the Golden Globes aired, Dylan Farrow tweeted a reminder of why she went public with her accusations against her father some years ago. Dylan is Woody Allen's daughter with Mia Farrow:

It's #GoldenGlobes Sunday. Four years ago, at the Globes in 2014, Woody Allen was awarded the Cecil B. DeMille award for lifetime achievement. Four years ago I decided enough was enough and wrote an open letter detailing the abuse I sustained at the hands of Woody Allen. /1

Woody Allen's son Ronan Farrow is one of the journalists who reported on Harvey Weinstein's decades of sexual misconduct last year, leading an investigation by The New Yorker.