Priyanka Chopra made her debut appearance at the Golden Globe Awards (courtesy: AFP)

New Delhi: Priyanka Chopra's Golden Globes debut appears to have been a hit, at least in fashion terms. Priyanka, 34, walked the red carpet looking like molten gold herself in a dazzling metallic dress by Ralph Lauren. Rubbing shoulders with fashion stars such as Emma Stone and Blake Lively, Priyanka seems to have acquitted herself with honours and has received rave reviews on Twitter. Priyanka Chopra, who was invited to present at the Globes, is lead actress on America TV series Quantico but was also apparently representing her Hollywood debut feature Baywatch, releasing this year. She and The Walking Dead actor Jeffrey Dean Morgan gave away the Best TV Actor - Drama Globe to winner Billy Bob Thornton and her appearance has earned her a slow clap from social media, led by her Baywatch co-stars who appeared smitten by her million-dollar look. Here is Priyanka Chopra in her mega-watt dress on the Golden Globes red carpet: 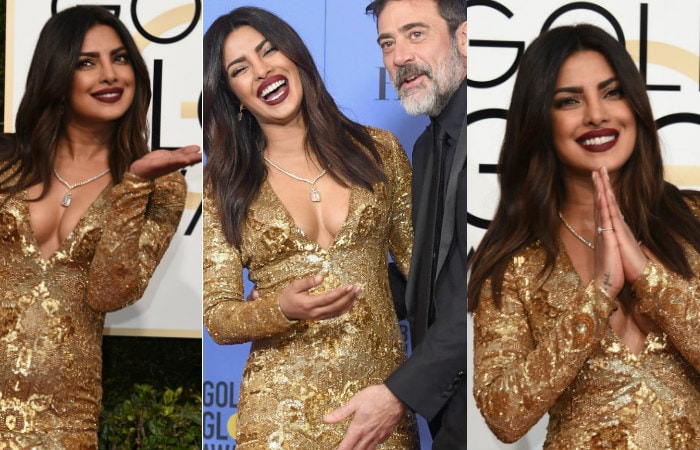 The various moods of Priyanka Chopra at the Golden Globes (courtesy: AFP)

Priyanka will be seen as the main antagonist Victoria Leeds in the Baywatch movie, which also stars Dwayne 'The Rock' Johnson and Zac Efron as lifeguards. Priyanka referred to her character in a tweet that that declared "bad guys do have all the fun." The Rock revised the statement, saying: "Bad is an understatement," for Priyanka was "stunning."

Bad is an understatement. Why I luv her! Stunning tonight #BeingBaywatch#GoldenGlobeshttps://t.co/hL2j7h4Cu8

Zac Efron posted a shout out for Priyanka and Team Baywatch. "You look beautiful," he added.

Yasmine Al Massri, who co-stars with Priyanka in Quantico, summed up what Twitter has to say in few words. "Priyanka set the Golden Globes red carpet on fire," she tweeted.

Meanwhile, the general verdict on Twitter is that desi girl Priyanka Chopra was unchallenged on the red carpet. A 'golden goddess' is what Twitter called her.

Our desi girl @priyankachopra is slaying at the #GoldenGlobespic.twitter.com/kpRg7RM75l

Looking like a Golden Goddess in @RalphLauren on the #GoldenGlobes Red Carpet! #GoldenGlobesWithPCpic.twitter.com/2yFYv737HM

Priyanka Chopra Slaying at the #GoldenGlobespic.twitter.com/fF5xEt2pLG

Looking like a Golden Goddess in @RalphLauren on the #GoldenGlobes Red Carpet! #GoldenGlobesWithPCpic.twitter.com/2yFYv737HM


This is the third time Priyanka Chopra presented at a major international award show. Last year, she was at the Oscars and the Emmys - where she was paired with Tom Hiddleston, a Golden Globe winner this year. Priyanka plays the lead role of FBI-turned-CIA agent Alex Parrish in Quantico, now in its second season.

Promoted
Listen to the latest songs, only on JioSaavn.com
Priyanka Chopra's Oscar dress was featured on Google's end of the year list and we've already spotted her on more than one international best-dressed round-up today.

Meanwhile, Priyanka is also nominated for the People's Choice Awards for the second time in a row, courtesy her Quantico role. Priyanka won Favourite Actress is a New TV Series last year. Back home, Priyanka Chopra was last seen in Prakash Jha's Jai Gangaajal and has revealed she will sign two Hindi films this year.