"Glamingo": Ananya Panday's Perfect Caption For These Stunning Pics From The Maldives

Why so gorgeous, Ananya Panday? 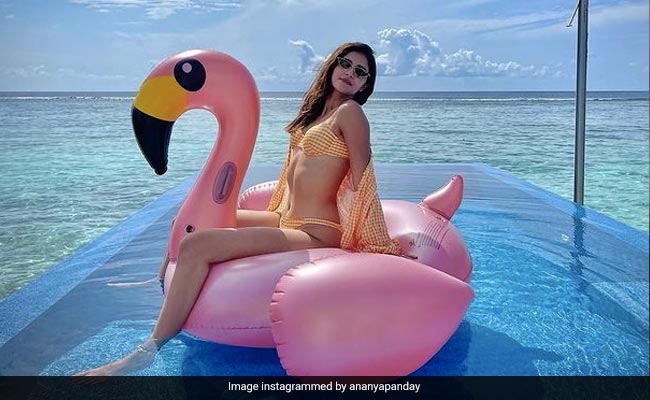 Another day, another glimpse of Ananya Panday's Maldives vacation. The actress, on Sunday, shared two stunning pictures of herself chilling in a pool and made her fans green with envy. Ananya Panday flew to the Maldives for work and the actress managed to scoop out some time for fun at the beach destination. In her latest post, Ananya can be seen sporting an orange and white bikini, which she paired with a matching shrug. She can be seen basking in the sun while sitting on a flamingo float in the pool. "Glamingo," the actress wrote in the caption and added a flamingo icon to it.

On Saturday, Ananya gave us a glimpse of her "plane pose" and it is as funny as she is:

Last week, Ananya Panday set Instagram on fire by posting this photo of herself that she captioned: "Hot mess":

Recently, Ananya Panday announced her new film titled Kho Gaye Hum Kahan, in which she will be seen alongside Siddhant Chaturvedi and Adarsh Gourav. The film will be directed by Arjun Varain Singh-directed film.

Ananya Panday made her Bollywood debut with Student Of The Year 2, in which she shared screen space with Tiger Shroff and Tara Sutaria. The film was the sequel to 2012's Student Of The Year. She was next seen in Pati Patni Aur Woh, co-starring Kartik Aaryan and Bhumi Pednekar. Ananya's last film was Khaali Peeli. She has a couple of films lined-up now - she will next be seen in a film opposite Vijay Deverakonda (directed by Puri Jagannadh), as well as in Shakun Batra's romantic drama alongside Deepika Padukone and Siddhant Chaturvedi.