"Give Me The Outdoors Any Day Or Night": Raveena Tandon Went Scuba Diving With Husband Anil Thadani 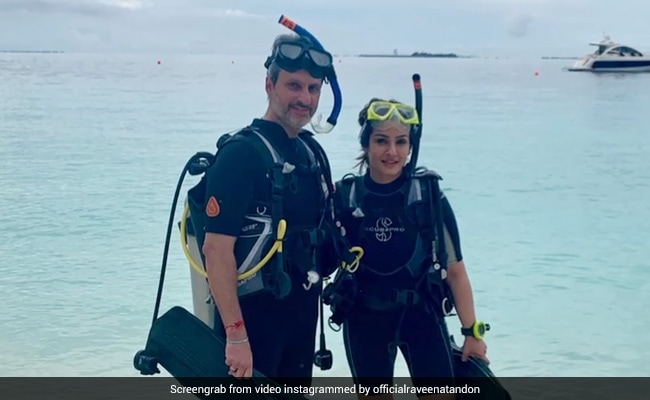 Be it skydiving or scuba diving, Raveena Tandon prefers "outdoors any day or night." The actress, on Wednesday, posted a video of herself and her husband Anil Thadani and expressed her love for outdoor activities. In the clip, Kareena and Anil Thadani can be seen enjoying a session of scuba diving underwater. "Skydiving, safari'ing, or deep-sea diving! Give me the outdoors any day or night!" Raveena Tandon wrote in the caption of her post. On her post, most of her fans dropped comments with the general sentiment: "Likewise. We feel you." See the actress' post here:

Raveena Tandon adopted two daughters named Pooja and Chaaya in the 1990s when she was a single mother. She married Anil Thadani in 2004 and the duo welcomed their daughter Rasha in 2005 and son Ranbir Vardhan in 2008.

Last month, Raveena shared a set of pictures with her husband that were clicked by their daughter Rasha and wrote: "My lifelong entertainment, my prayers for all, in these trying times, it's so important to have laughter and positivity, may love, happiness fill all your lives, may god be kind to all of us and bring the good times soon again."

Raveena Tandon will next be seen in Yash's KGF: Chapter 2, which also stars Sanjay Dutt. Directed by Prashanth Neel, the film is one of the most awaited films of the year.