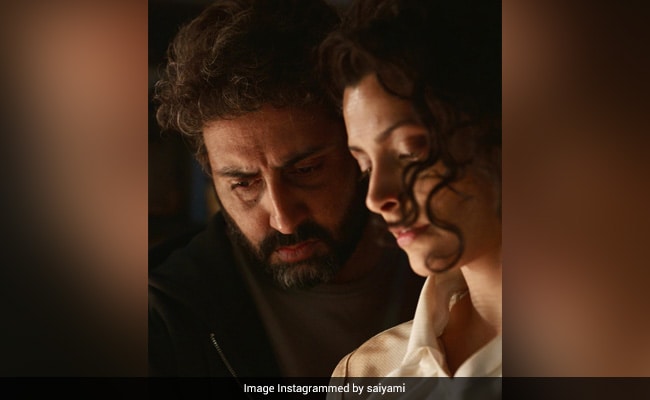 Abhishek Bachchan's upcoming film Ghoomer has aroused curiosity among moviegoers for all the right reasons. The film's shoot schedule started earlier this year and as per the lead actress Saiyami Kher, the journey so far has already been pleasant thanks to her co-star, Abhishek and the film's team. The actress posted a still from the shoot and shared a heartwarming message on Wednesday. In the note, she said, “Every project I do it feels special, some feel extra special.”  Saiyami then went on to talk about how significant this role is for her. She wrote, “All my life, I have dreamt of living the life of a professional cricketer. Ghoomer gave me that opportunity. As they say, when you really want something, the universe conspires to make it happen. This project taught me that.”

Ghoomer, which is being directed by R Balki, is "all about teamwork”, said Saiyami. “Captained by R. Balki, shot by Vishal Sinha, Ghoomer was all about teamwork. This was a project with some of the nicest people I have met,” wrote the actress. She further said, “This was the project that let me play a sport which I love. A project that let me play one of the most challenging roles I've played thus far; both emotionally and physically. It feels too good to be true.”

Abhishek Bachchan had also shared a post about Ghoomer way back in February on his birthday. Calling it a “working birthday”, the actor announced on Instagram that the shoot for Ghoomer had begun. He posted a photo of the clapboard of the upcoming film and said, “Can't ask for a better birthday present. Birthdays are best spent working. Ghoomer…Now spinning.”

Deepika Padukone Glams Up Mumbai And How