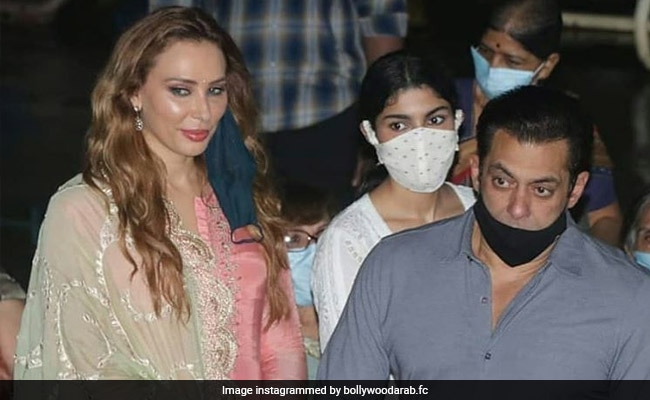 Pictures from Salman Khan's Ganesh Chaturthi festivities with family are trending big time. Over the weekend, the actor was spotted at sister Arpita Khan Sharma's Mumbai residence, and later stepped out for the visarjan. BTW, do you know who was Salman Khan's plus one at the festivities? It was Iulia Vantur, who Salman Khan is reportedly dating. Iulia picked a pink kurta for the festive occasion and she paired it with a mint dupatta. Also present at the celebrations were Salma Khan, Helen, Sohail and Arbaaz, Atul Agnihotri, Alvira, Aayush Sharma and Arpita Khan Sharma.

Iulia is frequently spotted at parties and events hosted by Salman Khan and his family. However, their current relationship status is unknown as Salman and Iulia have never addressed the rumours of their romance .

Salman Khan moved to his Panvel farmhouse before the nationwide lockdown was imposed in March because of the coronavirus outbreak. Salman was joined by actresses Jacqueline Fernandez and Daisy Shah and Iulia Vantur, sister Arpita Khan Sharma, her husband Aayush Sharma along with their kids Ahil and Ayat. On World Environment Day, Salman Khan posted a video, in which there was also a glimpse of Salman's rumoured girlfriend Iulia Vantur. Salman and his family returned to Mumbai on Eid.

ICYMI, take a look at this video:

Iulia Vantur is a Romanian TV presenter and she made her debut in the Indian music industry with the song titled Every Night And Day, with music composer Himesh Reshammiya.

Salman Khan will next be seen in Radhe: Your Most Wanted Bhai, co-starring his Bharat co-stars Disha Patani and Jackie Shroff. The film will also star Salman's Kick co-star Randeep Hooda. Dabangg 3 was his last release. The actor has also signed Kick 2 with Jacqueline Fernandez. The makers recently announced the project officially.