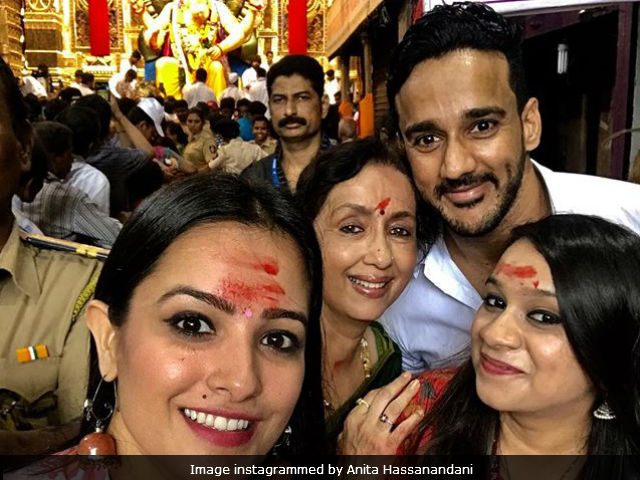 New Delhi: Anita Hassanandani instagrammed a beautiful picture of herself with husband Rohit Reddy worshipping Lord Ganesh at Lalbaugcha Raja in Mumbai on Wednesday. The recent Mumbai rains could not put a stopper in Anita Hassanandani and her husband's Ganesh Chaturthi celebrations. Anita, who features as Shagun in Star Plus' popular show Yeh Hai Mohobbatein, was accompanied by her co-star Neena Kulkarni and friend Ruchika Singh. In the picture shared by Anita, Lord Ganesha's idol looks divine as Navsacha Ganpati. Lalbaugcha Raja is the most famous sarvajanik Ganpati pandal, set up at Lalbaug, a prominent locality in Mumbai, during the 10-day festival. On the picture Anita wrote: "Thanks for a great darshan, feeling blessed."

Not only Bollywood stars but also TV actors are celebrating Ganesh Chaturthi with great pomp and show. They are often seen worshipping Lord Ganesh at various Ganpati pandals in Mumbai, like all Mumbaikars.

Rithvik Dhanjani made Ganpati idol himself this year and instagrammed a picture with Raqesh Bapat.

Anita and Rohit are one of the most endearing couples of the television industry. Anita is quite active on social media and keep posting her adorable pictures with her husband.

Anita Hassanandani made her Bollywood debut with 2003's Kucch To Hai. She also featured in films like Krishna Cottage, Koi Aap Sa and Hero.