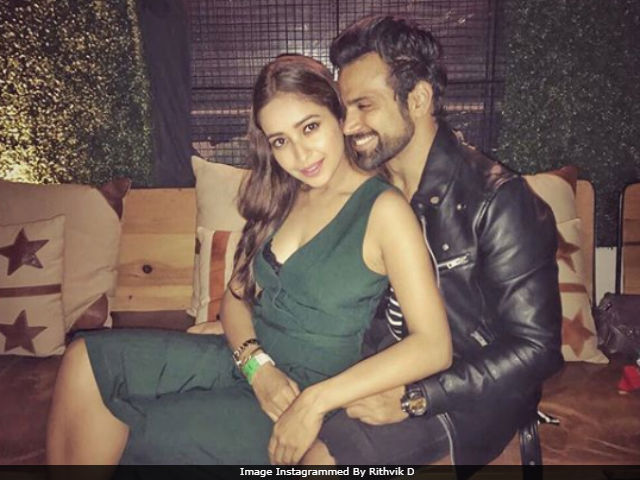 New Delhi: Television actress Asha Negi, who played the role of Purvi in Ekta Kapoor's Pavitra Rishta, turned 28 on Wednesday. While her celeb friends like Anita Hassanandani, Ravi Dubey, Ankita Bhargava posted pictures with Asha earlier in the day, her boyfriend, actor Rithvik Dhanjani was a bit late. However, their cute picture deserves all the attention now. Rithvik Instagrammed a picture of himself with Asha, who is posing for the camera while he smiles looking at her. (Adorable). "If there truly is a queen of hearts that I know it's you baby. No matter where you are or who's company are you in, there is always love around you and that's your magic. I hope that this magic continues to stay with and around you for all your years to come. Wishing you the happiest birthday," Rithvik captioned the post.

if there truly is a queen of hearts that i know its you baby..no matter where you are or who's company are you in there is always love around you and that's your magic...you have the power to make anyone feel better about themselves and put a smile on their faces just with that lill magic of yours you make my world a better place for me to live in, you've made me a better version of myself with that magic and i hope that this magic continues to stay with and around you for all your years to come wishing you the happiest birthday ever nanu!!!

Here's what Asha Negi's celeb friends posted on her birthday.

Promoted
Listen to the latest songs, only on JioSaavn.com
"Happy birthday! Thank God we met. Love you! Have a super duper year," wrote Anita, who plays Shagun in Ye Hai Mohabbatein. Ankita Bhargava, wife of actor Karan Patel also posted a picture of herself with Asha and Anita. Last December, the trio went for a trip to Paris.

Happy wala Happy Bday to the sweetest girl on this planet! #madness is her middle name Loads of love to u Asha! Have a beautiful year ahead @ashanegi

Beautiful in every way that's what this girl is....her adorable childlike quality makes you want to protect her against everything hostile .....when my humour is at its crappiest worst her hysterical reactions make me feel like I am at the top of my game ...that's what she does she makes people feel good about themselves ....I am always around ANDE always a call away remember it ,no matter what you need and whenever you need it ...god bless you with the happiest most joyful existence...happy birthday my dear @ashanegi photo courtesy

Asha Negi and Rithvik Dhanjani first met on the sets of Pavitra Rishta, their debut television show. They have been dating for over five years now. The couple together participated in dance reality show Nach Baliye 6. Asha has been part of shows like Bade Acche Lagte Hain, Ek Mutthi Aasmaan and Yeh Hai Aashiqui.