Game Of Thrones: What's Next For Jaime Lannister - Death Or Worse?

In the last scene of The Spoils Of War, Jaime was shown sinking into deep water. What'll happen next? Does he die or will be taken hostage by Daenerys Targaryen? 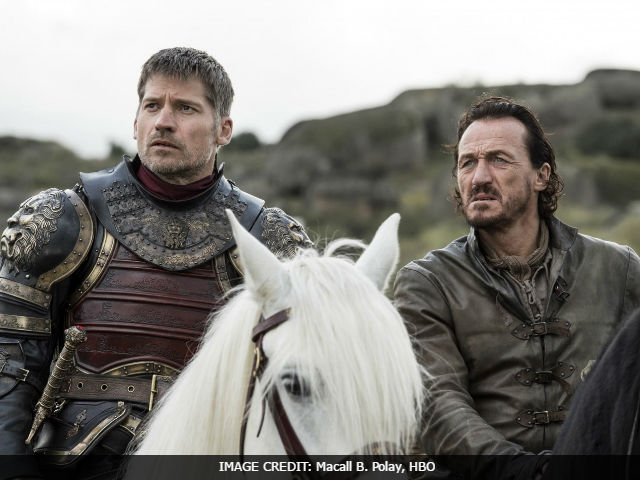 Washington: Sunday night's episode of Game of Thrones had quite the cliffhanger. In the final scene, Jaime Lannister - in the midst of trying to take out Daenerys Targaryen - was nearly burned to a crisp by her dragon but was rescued at the last moment. The final image of the episode was Jaime sinking into deep water beside the field where the Dothraki just pilloried his army.

What does this mean for him? There are four very different possible outcomes. Let's take a look at which one is most likely.

He certainly didn't seem to be in any rush to swim back to the surface. Maybe he was injured or playing dead or maybe he knew that attempting to tread water in armor is a fool's errand. Then again, he could just be giving up because he turned a major victory into an epic loss, and death would be better than facing his despotic sister/lover.

Likelihood: Very low. It doesn't do much for the story other than bring back emo Tyrion, which is something the show doesn't need - especially since it just brought back fun, witty Tyrion. Plus, if he was going to die, doing it with dragon fire would have been a more dramatic option.

Jaime's alive and he manages to get back to King's Landing

Where would Jaime go if he could? Most likely back to his sister. The fact that he tried to kill Dany rather than high-tail it out of there means he still has some allegiance to Cersei and her cause.

Likelihood: Medium. It would certainly make for interesting character interactions. How would Cersei react to Jaime's loss? At some point is she going to lose interest in a guy who can't deliver what she needs?

Jaime's alive and pulls a Hound, joining up with the Brotherhood without Banners or some other group of randoms

If you were Jaime, would you want to face Cersei? Remember how mad she was when he returned home without his hand? Now imagine him coming back without an army.

Likelihood: Medium-low. But it's fun to think of the great dialogue that could be written for sparring matches between Jaime and the Hound. Looks like you'll probably have to reserve that for your fan fiction.

Since the area is crawling with Dothraki, Jaime and Bronn are probably going to be captured and taken back to Dragonstone as prisoners of war.

Likelihood: High. It seems fated that Jaime and Tyrion should meet again. The two always had an intriguingly complicated relationship, and it couldn't be more dramatic than at this moment when they're working for rival queens. And since Jaime rescued Tyrion from certain death at King's Landing, doesn't that mean Tyrion owes his big brother the same in return?

This would also put Cersei at a crossroads. She'll have to probably choose between her twin and the throne - and we know she's never going to give up her power. So what would that mean for Jaime? He could turn on her. He was clearly troubled by her breezy response to Tommen's death. Even though their kids were dead and their legacy was gone, she still hungered for power. Maybe that won't be enough to get Jaime to join Dany's side, but it would be exciting to watch him grapple with his choices, especially since it wouldn't be the first time he turned on a sociopathic monarch.

(Except for the headline, this story has not been edited by NDTV staff and is published from a syndicated feed.)
Comments
game of thronesthe spoils of warthe spoils of war jamie lannister