Game Of Thrones 8: When Did It Become A Bad Rom-Com?

Game Of Thrones 8: Dany, Jon, a couple dragons and a waterfall in Winterfell. What's more romantic than that? 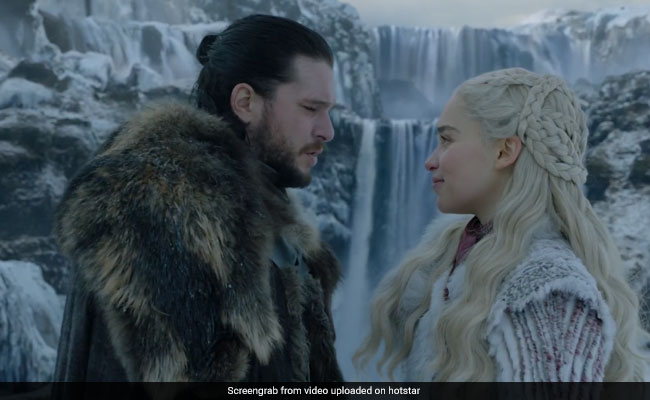 Game Of Thrones returned Sunday night after a nearly two-year hiatus, but it wasn't the murderous spectacle the show's bloodthirsty fans long awaited. Aside from a few (read: 21 or so) deaths and a child turning into a White Walker, the episode was filled with some rather lighthearted reunions and Bran Stark/the Three-Eyed Raven/lost member of the Cure creepily staring at people.

While the reunions were to be expected, the show turning into a bizarre romantic comedy for a few minutes - tentatively titled Sleepless In Winterfell - certainly wasn't. But that's exactly what happened when Jon Snow and Daenerys Targaryen decided to take a little romantic jaunt by a waterfall. (Unfortunately for everyone involved, this was a few minutes before Sam Tarly told Jon Snow that Daenerys is his aunt. Whoops!)

These crazy kids kick off their date with a conversation that might have been lifted right out of 10 Things I Hate About You.

"Your sister doesn't like me," Daenerys complains to her new beau about Sansa Stark, whom she just met. "She just doesn't know you," he responds. "She didn't like me very much growing up."

Needing a little alone time (ruling is just so draining), they decide to ride her dragons around for a while (and no, that's not innuendo, but maybe it should be).

But wait, you might be thinking, Jon doesn't know how to ride a dragon, does he?

Being the sweet, aw-shucks guy he is, he shyly tells Daenerys this and asks, "What if he doesn't want me to?"

"Then I've enjoyed your company, Jon Snow," she responds.

Boy, is he out of his comfort zone!

The zingers just keep coming as Jon mounts the dragon and asks what to hold on to. "Whatever you can," she responds.

The sequence gets even more mindbogglingly inexplicable from there, as the two . . . just ride dragons around. As one Twitter user noted, it felt like the romantic carpet-riding scene from "Aladdin."

"If you mute the dragon date scene from #gotseason8 and add aladdin's a whole new world as the soundtrack, you've created a perfect romcom. Listen along as we lose our minds," tweeted one fan (who actually filmed this very thing).

Jon and Daenerys finally land at the most amorous spot in Winterfell: a waterfall that has never been mentioned, as if there's just a tropical paradise hiding among all this snow.

"We could stay a thousand years," she tells him. "No one could find us."

"We'd be pretty old," Snow quips. Forget the Iron Throne, somebody get this guy to an open mic.

"It's cold up here for a Southern girl," he flirts.

"So keep your queen warm," she flirts back.

Cue make-out city. Then - and this is really a true thing that happened on this television show we've all waited nearly two friggin' years to watch again - the dragons start exhaling unhappily as they spy on the kissing couple.

"Don't be afraid," giggles Daenerys, before diving back in for some more Snow.

If you watched this scene and couldn't help but scratch your head, wondering if you forgot how Game Of Thrones works, you were not alone. People were not happy, given that there are only five episodes left and precious screen time was wasted on . . . this. It's like the Dorne disaster all over again.

One user tweeted he was "extremely nervous about this season . . . after all the time wasted in that episode. We have five episodes left and we spent at least 20 mins on some dumb romcom scenes." He also implored someone to make him feel better. (Does this help?)

Another user tweeted her unhappiness: "Is this going to be a sappy romcom now wtf."

"Someone explain to me why the weird romcom moment . . . was necessary but we can't see Ghost again??" tweeted a third.

There you have it. Everyone's busy predicting who will sit on the Iron Throne, but maybe the show's more interested in whom to couple up next. Arya and Gendry? Yara and Theon? The Night King and Brienne? Who knows!