Game Of Thrones 7: Bran Stark On Memes And, Wait, Did He Just Confirm The Night King Theory?

"Bran is so dead set on his ultimate destiny, which I think is something to do with those White Walkers," said Isaac Hempstead-Wright, actor who plays Bran Stark 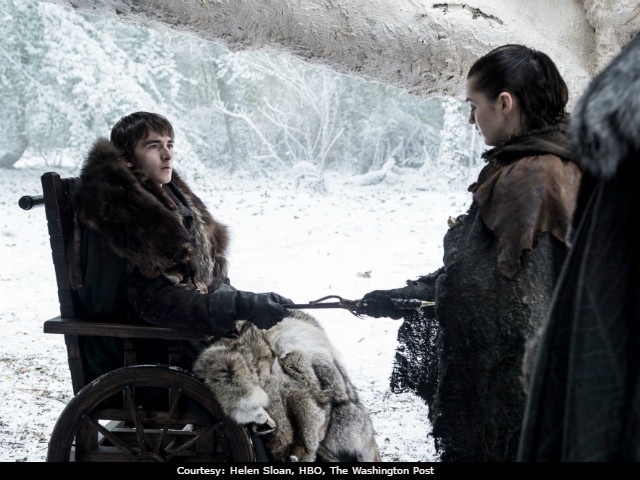 Bran Stark has changed a lot over the years since Game of Thrones started, and not just because actor Isaac Hempstead-Wright was a mere 10-year-old pipsqueak when it all began. In the last season, Bran has transformed from an earnest young man to the emotionless, omniscient Three-Eyed Raven, with all the explosive Iron Throne intel that comes along with it.

How does Hempstead-Wright feel about the big shift? He called from his home in England to discuss.

Q: This seems like an ideal time for you. The season is done but you don't have the scripts for the next season yet, so no one can bug you about what will happen.

A: This is the golden period where I can theorize with everyone else. The second I get the scripts, it's like, ohhhh man, I can't make any theories.

Q: Your character has obviously changed a lot over the years. Do you approach the acting differently at all?

A: Definitely. I had a meeting with our producers David (Benioff) and Dan (Weiss) before we started shooting, and they said we want it to be a little like Dr Manhattan from the Watchmen comics. This idea of Bran's mind simultaneously existing all over history - never in one place at one time. Whenever he's sitting anywhere he's living through so many different timelines. But one of the key things is we wanted to make sure it didn't just become boring and monotonous because when you've got a character whose delivery is just straight, it can become very boring to watch. So we really wanted to (capture) that slight glimmer of mystery or a personality that's still there.

Q: It's interesting because he knows so much, but he's a little stingy about telling people what he knows.

A: That's the thing, though. Bran doesn't exactly know everything. It's a bit ambiguous. It's like he's got a Kindle library of everything in his head but he hasn't read through it all yet. Whereas the other Three-Eyed Raven has sat in a tree for 1,000 years and has been able to look it all up and now knows it all by heart. Bran doesn't yet, so it's not like he's withholding information, it's just that he doesn't know where to look yet.

There was actually a scene that was meant to be in the last episode but didn't make it in where Sansa came to Bran's chambers and said, "Bran, I need your help," and so the idea was that Sansa came to him just to fact-check, like, "before I kill my sister, can you confirm that's what's going on?"

Q: What an amazing scene. That would have been helpful.

A: I'm not sure why that didn't make it in - I'm not even sure if I'm supposed to be saying this honestly! Anyway, Bran is so dead set on his ultimate destiny, which I think is something to do with those White Walkers, that all this sort of petty squabbling around him isn't bothering him that much until someone says, "oh, can you look this up?"

Q: Since you can theorize now, I want to talk about what it would be like for Bran to meet up with Jaime Lannister. Do you think he'd forgive Jaime for paralyzing him?

A: Bran wouldn't care on that front at all. I think it would be more interesting to see Jaime. The way Bran was able to freak out Littlefinger, I think he could definitely freak the (expletive) out of Jaime. I'd also love to see that because from the first episode, it was obvious that Jaime was morally reprehensible - what a terrible man. And as it's gone on, it's like we really aren't sure if he's actually a good guy. So I think it would be interesting to see his reaction to the child he tried to murder unsuccessfully and see just how terrifying he's become. Not that Bran would ever use his powers to kill Jaime or do any harm to him, but I think that would certainly freak Jaime out to think, "oh god, what have I done?" I reckon that would play on his conscience a bit.

Q: I understand you're aware of all the memes. Are you at the point where you see something in a script and think: Oh yeah, that's going to end up on Twitter?

A: Yeah. The one time that really happened - but not in a script - was the scene where I was lying outside the cave with Meera in season six. And I was lying in this kind of pose. You know the "draw me like one of your French girls" meme? They were like "yeah, lie a bit like that," and I just thought, "ohhhhh, I know this is going to be a meme!" And lo and behold, it was a meme. Although as a meme aficionado myself, I like to see myself in memes. I think it's really cool.

Q: All the Game of Thrones actors seem to handle the memes well, like Art Parkinson's tweet after his character Rickon was killed.

A: Yeah, we love the show as well, that's the thing. So when we see a funny meme, whether it's about our character or another, we genuinely do enjoy sharing them around and seeing them. That's what's so nice about the show. It's not just another job. We love the show as much as the fans do.

Q: Where would you ideally like to see Bran end up?

A: Um ... alive? Bran must be able to look up something important. He knows how the White Walkers were created. And especially since we've now seen how when you slash down a White Walker, some of the zombies die, so maybe if that information could get to Bran there's something he could look up and understand more. I think Bran's destiny will be involved somehow with the White Walkers especially since the Night King has an issue with the Three-Eyed Raven. Clearly Bran is in his sights as a target.

Q: Who do you want to see on the Iron Throne?

A: I honestly think the Iron Throne is one of the greatest red herrings in television history. I don't think there will be an Iron Throne by the end of season eight. I reckon there's going to be so much death and destruction on every single level that society can start again. But personally, I think what's clever about the show is there's no real clear candidate. There's not a single one who's the ideal leader. Daenerys is slightly crazy. Jon Snow would be great on the Iron Throne but, as we saw, he's slightly too honest for this world.

I mean, the ideal candidate is probably the Night King when you think about it. No one can really get to him; he's got no family that he'd be upset to see executed. He's the perfect cold - literally (ba-dum-ch) - king.