Gadar 2 Motion Poster: 20 Years Later, Sunny Deol And Ameesha Patel Are Back With "The Biggest Ever Sequel"

"After two decades the wait is finally over. Announcing the biggest ever sequel in Indian cinema," Ameesha Patel wrote while sharing the motion poster 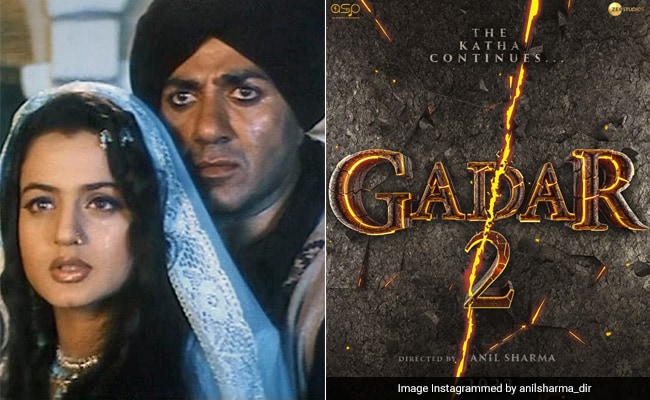 Sunny Deol and Ameesha Patel will return in Gadar 2

Sunny Deol made a blockbuster announcement on Dussehra - Gadar 2. On Friday morning, Sunny Deol revealed that a sequel to his 2001 movie Gadar is in the making. Sharing a first glimpse of sorts, Sunny Deol wrote: "After two decades the wait is finally over! On the auspicious day of Dusshera, Presenting to you the motion poster of Gadar 2." The Gadar 2 motion poster is brief but a dramatic one, featuring fire burning through cracks on the soil, hinting at how intense the sequel is going to be. Ameesha Patel, who co-starred with Sunny Deol in Gadar, described the sequel in these words: "Announcing the biggest ever sequel in Indian cinema."

Take a look at the motion poster of Gadar 2 here:

Anil Sharma, who helmed the 2001 movie, is returning as the director of the sequel as well. Gadar 2 also stars Anil Sharma's son Utkarsh Sharma, who featured as a child artist in Gadar. Gadar, which eventually became a blockbuster, was the story of a Sikh truck driver named Tara Singh, played by Sunny Deol, who fell in love with a Muslim girl Sakina, portrayed by Ameesha Patel. Tara and Sakina's love story was set against the Hindu-Muslim riots during the Partition era.

Earlier this year, as Gadar clocked 20 years, director Anil Sharma said in a statement, reported PTI: "Tara could only be played by Sunny. I needed someone extremely powerful, extremely innocent. There''s no one in the industry apart from him to do this. I had him in mind while conceptualizing the film. I knew Sunny would be iconic in the film."