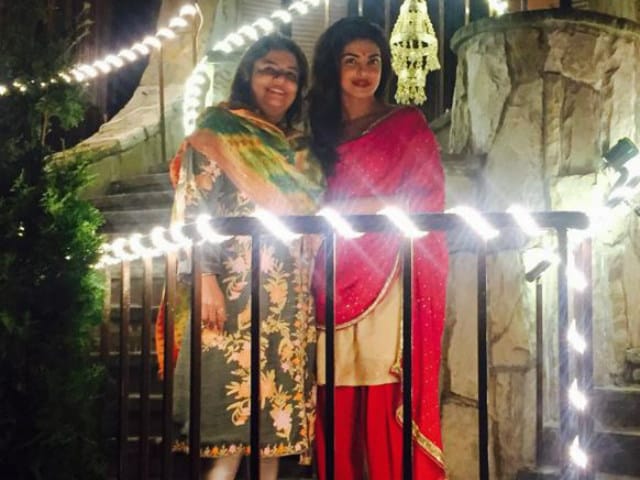 New Delhi: Preity Zinta said it best - every day truly is Mother's Day. But we'll take May 8 - the day designated to celebrate motherhood was filled with memories and messages, many of them from celebrities such as Priyanka Chopra, Sonakshi Sinha, Alia Bhatt, Bipasha Basu, Shraddha Kapoor and Jacqueline Fernandez.

Priyanka is currently filming with Hollywood star The Rock but her real 'rock' is mother Madhu Chopra a photo collage of whom she posed on Instagram:

Happy Mother's Day @chopramm2001 You are my rock through everything.. Miss u. Love u tons

Sonakshi posted a photograph of herself and her mother Poonam Sinha:

No place more peaceful than in my mommy's arms! My face says it all! Thank you for showing me the kind of love you have no matter how much i trouble you!!! #loveyoumommy #happymothersday #family #love #strength #values

My lifeline, my strength, my best friend, my angel. Happy Mother's Day mommy. I love you more than anything in this world.

Alia and her mother Soni Razdan are picture perfect:

My beautiful mommy!!! You deserve to be told everyday how lovely you are... How brave and strong you are.. how you make everything so easy for me and make my life so Rosy and cosy haha thank you @htcafe @HTMumbai @iamkav for the interview and the pictures!!! #HappyMothersDay

Shilpa Shetty Instagrammed a picture of her parents - mother Sunanda and father Surendra Shetty - sister Shamita, herself and Viaan:

Happy Mothers Day my darling Ma, I adore ,worship,emulate and Thank you every single day.Im truly Blessed to have you in my life

A photo posted by Shilpa Shetty Kundra (@officialshilpashetty) on May 8, 2016 at 6:31am PDT

Bipasha shared a photograph from her wedding reception, which features her mother Mamta:

Happy Mother's Day to all the wonderful superwomen, The MothersAm truly blessed to have my superwoman my Ma. Love you Ma

Sushmita Sen celebrated with her daughters Renee, 16, and Alisah, 7. They went on a dinner date and Renee and Alisah also presented Sushmita with a lovely card:

What a precious day I am having!!!! #overwhelmedwithlove in the company of #angels #cake bought from #pocketmoney #handmade #cards n I love u's floating everywhere thank u #alisah #renée #maalovesyou #toing #toing

Jacqueline shared multiple pictures of herself with her mother. Baby Jacqueline was just so cute:

My mum has asked me to stop spamming her on insta Its just that I love you and miss you and wish I was with you right now!!! #mothersday

She always made sure we had amazing birthdays... Love you Mumsie #mothersday @kimfernz77

Actress Dia Mirza thanked her mother Deepa for being her 'guiding light:'

Happy Mother's Day Mamma! I am because you are. Thank you for being my guiding light and thank you for every time you have scolded me hard. No one in this world can make me see sense and no one can make me REALISE things as powerfully as you can. Our roles may have reversed, but that does not mean that while I love playing mommy to you that I can ever do without you being my mamma. And you always seem to know when you need to be mamma again #MothersDay

Actress Genelia D'Souza had special messages for 'Mama' and 'Aai:'

Happy Mothers Day Mama n Aai ... Thank u for being the best examples to follow.. I love, worship and respect you'll the most

Actress Preity Zinta was by her mother Nilprabha's side on Sunday:

MOTHER... The most powerful word in the world.. N also the most taken for granted! #happymothersdaypic.twitter.com/Btp3zo76zP

This is what Aamir Khan wrote on Mother's Day:

Wishing all mothers a very happy Mother's Day! Love. a.

Sidharth Malhotra shared a nice quote with this picture:

"Men are what their mothers made them."-Ralph Waldo Emerson thank you Mom !#HappyMothersDaypic.twitter.com/Zfkb4hmylT