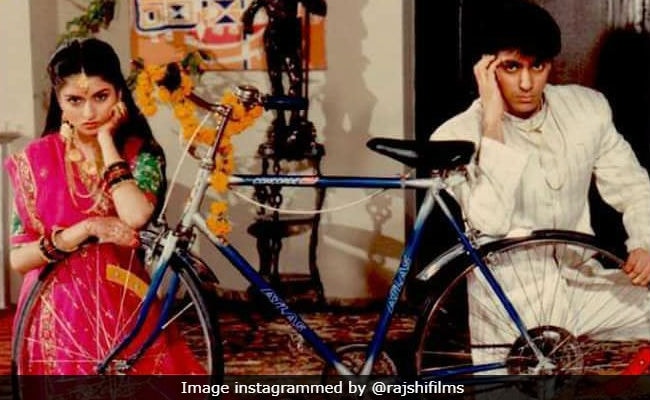 Much before Salman Khan was called 'Sultan' or 'Bhaijaan', the superstar was known as 'Prem', a popular screen name given by filmmaker Sooraj Barjatya, who says, its origins, just like his films, stem from the family. Mr Barjatya made his debut as a director with 1989's Maine Pyar Kiya, which starred Salman Khan as Prem, in what went on to become his breakout film. The duo then worked on films like Hum Aapke Hain Koun...!, Hum Saath-Saath Hain and Prem Ratan Dhan Payo, in which all of Salman Khan's characters were christened Prem. Even in the two films which Mr Barjatya directed without Salman Khan, Main Prem Ki Diwani Hoon starring Hrithik Roshan and Abhishek Bachchan and Vivah featuring Shahid Kapoor, he retained the name Prem for the male protagonists.

In an interview with PTI, Mr Barjatya said the name encapsulates everything he wants to say through his films. "'Prem' signifies a man who has his basics right, who's traditionally rooted, has fun but loves to be with his family and is good at heart," the director said.

For Sooraj Barjatya, the journey to arrive at the name which would later become a signature mark for all his films was a thought-out process. "When we were working on the script of Maine Pyaar Kiya, we were thinking about the name we should give to the hero. There were options like 'Gaurav', 'Pratap' and even 'Raj'. This is before Shah Rukh Khan came. So, 'Raj' was also there as an option," he revealed.

The director said there was a lot of deliberation on the name until he realised what he was looking for was within the family. "That time our Rajshri Productions' biggest hit was Dulhan Wahi Jo Piya Man Bhaye (1977). Prem Krishen ji was the hero and his name was 'Prem' in that film. So we all thought if that became a hit, let's use the name for this film too in the hope that this would become a hit too. So that's how this name started and has stayed till now," he added.

Soraj Barjatya's films have always featured wealthy, large families, often in the backdrop of a grand wedding or a lavish family function. The director said he is aware that there are people who feel this kind of cinema is dated but what he shows in his films is an honest reflection of his life.

"That's how we were brought up... In a house of 15 people. We all are still together. My whole life was spent with mamis, buas, daadis and functions. Otherwise, how could I make a Hum Aapke Hai Koun... ! at 25? That's the age to roam with girls and enjoy your youth. But what you see in my films, it's my life. My childhood was very green and beautiful. There was no dark side. My films come from what I saw growing up," he said.