"Fooled You All": Anita Hassanandani Hid Her Baby Bump In Pics Before Announcing Pregnancy 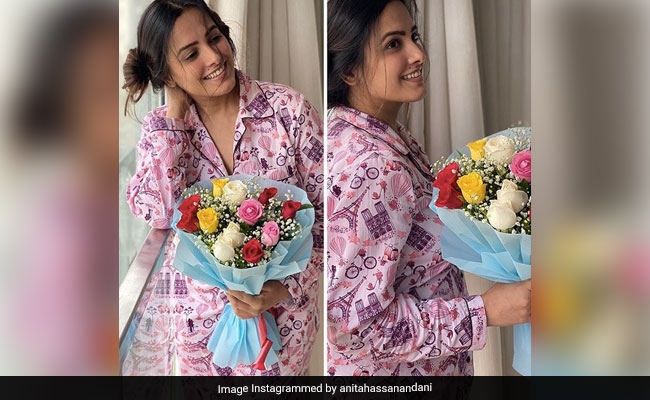 TV actress Anita Hassanandani, who is expecting her child with husband Rohit Reddy, shared in her latest Instagram post that she managed to successfully "conceal her baby bump" a couple of times. before announcing her pregnancy on Saturday. Anita shared four picture collages in her latest post, featuring the pictures she had posted recently juxtaposed with the similar ones showing her baby bump. The photos feature her sporting a night suit, a shirt and trousers, a long kurti and a lavender-coloured outfit for different photoshoots. "Four times I managed to conceal my baby bump. Kinda fooled you all!" the actress captioned her post.

Four times I managed to conceal my baby bump. Kinddaaa fooled you all!!! Swipe

Reacting to the actress' post, her friends from the television industry such as Smriti Khanna, Ridhima Pandit and Mukti Mohan dropped adorable comments. "Hahahahaha...I camouflaged it right till the end," wrote Smriti, who welcomed her baby daughter earlier this year, while Ridhima Pandit commented: "We happily got fooled."

Anita Hassanandani announced her pregnancy in a super adorable Instagram post showcasing her and Rohit's journey from being best friends to getting married and expecting a child together. "Getting ready for Reddy," read the caption on her post.

Anita Hassanandani and Rohit Reddy got married in 2013 after dating for a couple of years. The couple also took part in dance reality show Nach Baliye Season 9.

Anita Hassanandani is best-known for playing the role of Shagun Arora in Ekta Kapoor's show Ye Hai Mohabbatein. She has also worked in serials like Kabhii Sautan Kabhii Sahelii and Kkavyanjali, among others.