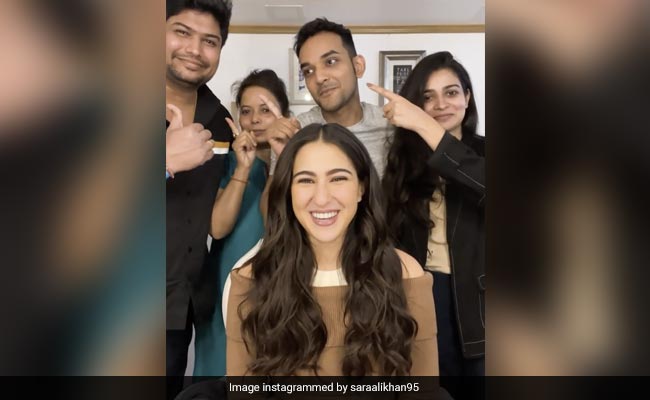 Sara Ali Khan is one of the most loved young stars in Bollywood. Much of her popularity can be attributed to how real she is on social media. From her day-to-day food cravings to candid behind-the-scene moments, Sara loves to keep fans updated on her personal and professional developments. So we weren't surprised to see her playing a "How Well Do You Know Me" game with her team in her vanity van as she was getting ready for a  shoot. Sara Ali Khan put forth a set of questions and gave her team two options to choose from and what followed was a whole lot of laughter and banter.

The game starts with the question -- "What would Sara prefer between the options: Find my soulmate and Win the lottery".  Sara Ali Khan's team chooses the second option, the lottery, and Sara agrees with a sly smile that her team had got it right. Next, she asks to them guess what she would pick between coffee and hot chocolate. While most guess that she would pick coffee, Sara's stylist Tanya Ghavri said she would choose hot chocolate. Picking coffee, Sara justified her choice by saying, "I like coffee because of my job, you see. I must look presentable." When given the option between friends and food, Sara and her team confirm that she would choose food.

The video further shows Sara Ali Khan choosing texts over calls, wavy hair over straight hair, and shopping at a market over shopping online. Sara also discloses that though her team gets to see her in the mornings, the actress prefers being a night owl. Sara prefers white shades over nude tones and loves to swim instead of running, the video revealed. But if she has to choose between trekking in the mountains and swimming in the sea, she will choose the hills. And between the sun and the moon, Sara can't really pick at all.

Sara Ali Khan captioned the video with her trademark shayarithat read, "Watch Sara Beam. Chilling with the dream team. This is my scheme. To see who knows me to the extreme. Some answers are trickier than they seem." Here is the video that she shared on Instagram:

Sara Ali Khan often likes to have fun while on set. Here's a video of the actress playing the alphabet game during her shoot.

Sara Ali Khan was last seen in Atrangi Re, co-starring Akshay Kumar and Dhanush. She will be seen in Laxman Utekar's next film with Vicky Kaushal.