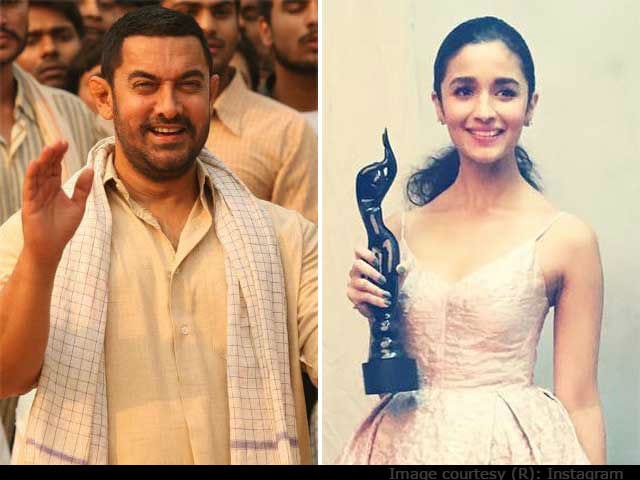 New Delhi: The 62nd edition of Filmfare Awards were held on January 14 in Mumbai and the entire Bollywood walked the red carpet in all their glory. Some of the big names of the industry came forward to celebrate the success of the winners. The star-studded event was co-hosted by Shah Rukh Khan and Karan Johar. Aamir Khan won the Best Actor (Male) Award for Dangal while Alia Bhatt was given Best Actress (Female) Award for her performance as a Bihari migrant worker in Udta Punjab. Nitesh Tiwari's wrestling drama- Dangal bagged three major awards- Best Actor, Best Film and Best Director. Shahid Kapoor won the Critics Award for Best Actor (Male) for Udta Punjab and Sonam Kapoor received the Filmfare Critics Award for Best Actor (Female) for Neerja.

And I took the black lady home tonight! Thank you Chaubey! Thank you Phantom & Balaji! The reason I got this script @shahidkapoor. Bebo.. Diljit! Love you Karan!!!!! Go team Udta Punjab Oh oh oh and THANK YOU FILMFARE wohoooooooooo #jiofilmfareawards

Came with one stunning lady and heading home with two. Thank you #filmfare. #udtapunjab congratulations @aliaabhatt and @diljitdosanjh

Winning the best actress award for Neerja, was a truly special moment.. but it was made more special because @aanandlrai gave it to me.. love you sir. Thank you @Filmfare I'll forever cherish this moment.

This time, the three Khans competed for the Best Actor category. Shah Rukh Khan was nominated for Fan Salman Khan for Sultan and Aamir Khan for Dangal. Aamir, 51, who was given the award, was not present at the event. The actor had last won the Filmfare Best Actor Award for Lagaan in 2002.

After receiving the award, Alia, 23, thanked Shahid Kapoor for sending her the script and said that Udta Punjab is very close to her heart. Nitesh Tiwari said: "This award is the reassurance of how much people loved Dangal and I would like to thank everyone who loved and supported our film. It means everything."

Manoj Bajpayee too won the Critics Award for Best Actor (Male) for Aligarh.

The nominations for the Filmfare Awards were announced last week and the audiences' were angry over excluding Akshay Kumar from the Best Actor award category for his acclaimed performances in Airlift and Rustom. 'Filmfare Awards On Sale' kept trending furiously and tweets came pouring in from Akshay's fan clubs.