Farhan Akhtar wants you to caption this photo of his 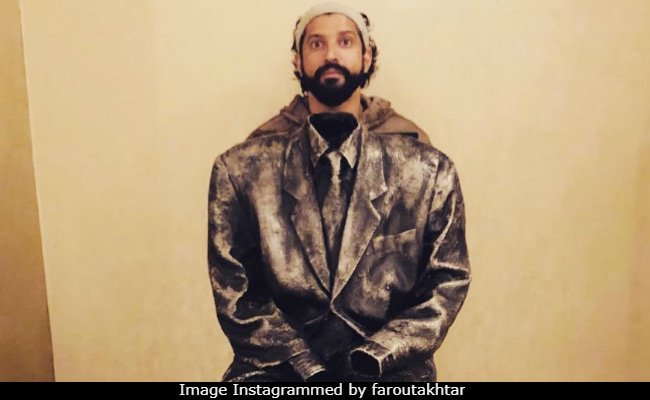 New Delhi: The very jolly Farhan Akhtar is in the mood to have some fun with his social media followers. Farhan shared a photo of himself, in which he stands behind a headless statue and places himself in such a way that it looks like a figure as a whole. He then asked his fans to caption the photo, promising to send an autographed version of this picture to the top three winners. "Caption this pic. Will send an autographed copy of this image to the top 3 posts #funtimes #letslaughalittle," Instagrammed the actor-filmmaker. Farhan's photo has garnered over 68,541 'likes' since morning with the comments section being flooded with hilarious suggestions for captions.

Here are some of the caption suggestions spotted on Farhan's feed: "With great suits comes great responsibility", "I am all brain and soul... and I don't care what body I'm in', 'What was I thinking!!! The hair band just doesn't match with the suit!", "Statutory Mirage!" and "Don't get a-head of yourself." But our personal favourite may have made Farhan smile too: "Main aisa kyu hoon."

Caption this pic.. Will send an autographed copy of this image to the top 3 posts #funtimes #letslaughalittle

Promoted
Listen to the latest songs, only on JioSaavn.com
Remember the song Main aisa kyu hoon from the Farhan Akhtar-directed movie Lakshya? It was Farhan's second film as a director after the very popular Dil Chahta Hai.

Farhan Akhtar's credits as a director also include films like the Don series of films starring Shah Rukh Khan. As an actor, he is best known for movies like Rock On 2, Wazir, Dil Dhadakne Do, Zindagi Na Milegi Dobara and Luck By Chance. He was last seen in jail-break drama Lucknow Central.
Comments
Farhan AkhtarFarhan Akhtar pic