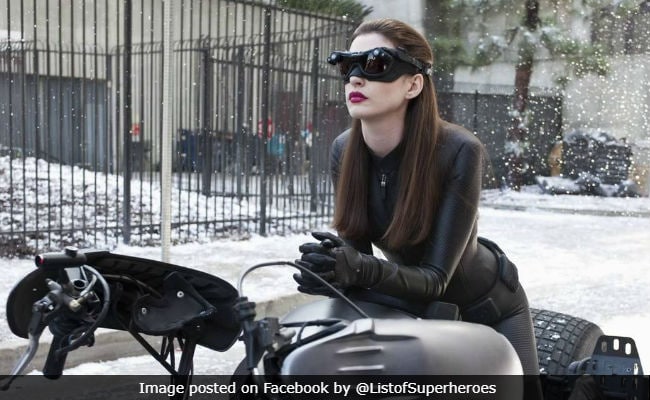 Anne Hathaway has passed the Catwoman torch to Zoe Kravitz, congratulating the actress in a message shared on her Facebook page. Anne, 36, played Selina Kyle or Catwoman opposite Christian Bale as Bruce Wayne/Batman in Christopher Nolan's 2012 film The Dark Knight Rises which wrapped his acclaimed Batman trilogy. Zoe, 30, was revealed as the new Catwoman just days ago - she will star opposite Robert Pattinson in the title role in The Batman, a standalone film expected to release in 2021. Anne Hathaway couldn't be more thrilled for Zoe Kravitz. She wrote on Facebook: "The biggest congrats to Zoe Kravitz on landing the role of a lifetime. Well, one life anyway. Enjoy the ride, Selina."

Michelle Pfeiffer, who was cast as Batman's feline nemesis in 1992's Batman Returns, had sage advice for Zoe. "Make sure whilst designing the costume they consider how you're going to go to the bathroom," Michelle said on Good Morning America.

Michelle Pfeiffer's advice for @ZoeKravitz in her new role as #Catwoman might surprise you pic.twitter.com/1LcZ0EIqFC

Jason Momoa, who is married to Zoe Kravitz's mother Lisa Bonet, couldn't be prouder. "So freaking stoked," wrote the Aquaman star in an Instagram post:

I'm so proud of u zozo bear. On and off screen OHANA. DC WB ohana Lola and Wolfies big sister is CAT WOMA Unbelievable so freaking stoked. Your going to have so much fun Aloha P bear

Selina Kyle or Catwoman is a polarising and intriguing figure in the Batman universe. A talented cat burglar, she is both a love interest and an adversary of Bruce Wayne/Batman. Catwoman has been played to varying degrees of success by a number of actresses - Julie Newmar and Eartha Kitt took on the role in the live-action TV series of the Sixties starring Adam West as Batman; big screen versions were played successively by Lee Meriweather, Michelle Pfeiffer, Halle Berry, Anne Hathaway and now Zoe Kravitz; origin story TV series Gotham

cast Camren Bicondova and Lili Simmons as the young and adult versions of the character.

Almost no other casting details about The Batman is known. Robert Pattinson takes over from Ben Affleck, who last played the caped crusader. Actor Jeffrey Wright is believed to be in talks to play Commissioner Jim Gordon.

Meantime, Twitter is struck by Aquaman and Catwoman being family.

lisa bonet is married to aquaman and her daughter is catwoman. she truly won pic.twitter.com/dhoN5DOwLZ

The Batman is being directed by Matt Reeves and is scheduled to release some time in 2021.