Everything About Jennifer Lopez And Alex Rodriguez's Beach Engagement Was Perfect 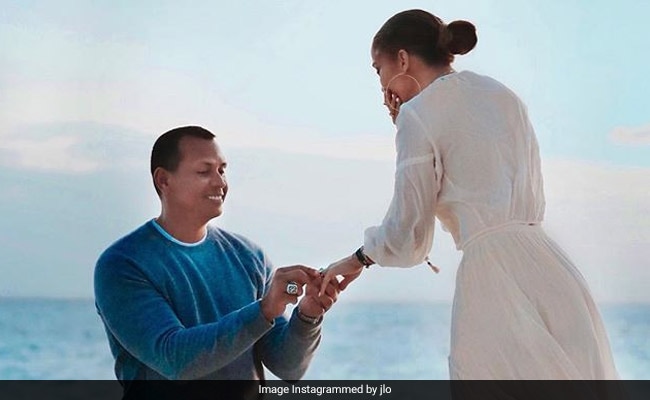 The sun, the sand, the sea and Alex Rodriguez on his knees for Jennifer Lopez - yup, it was picture-perfect. Jennifer Lopez, who got engaged to long-time boyfriend former baseball player Alex Rodriguez over the weekend in the Bahamas, where they are vacationing and shared breath-taking photos from when Alex proposed her. Jennifer marked the date in her caption - "3.9.19" - and left it just that while Alex's caption read: "Locking it down. Future Mrs Rodriguez." Jennifer Lopez shared the series of events in the order of their occurrence in the engagement-special album - in one of the photos, she's clearly awestruck and then ends the album with a mushed up photo of the two kissing.

On Saturday, JLo and Alex dropped the big news about their engagement with coordinated posts. "She said yes," wrote Alex while Jennifer tagged Ellen DeGeneres on her post. Later, the Ellen explained on her show that she persuaded Alex Rodriguez to pop the question. Jennifer Lopez's engagement ring is reportedly a 16-carat diamond worth $1.8 million, which apparently Alex Rodriguez took months to zero in on.

Two years of laughter Two years of fun Two years of adventures Of excitement of growing and learning Of true friendship And so much love!! You make my world a more beautiful safe and stable place... in the midst of our ever-changing, ever-moving life... you make me feel like a teenager starting out all over again... Every time I think I have you pegged, you surprise me in the most wonderful ways reminding me how blessed I am to have found you now in this moment at this time... our time... Te Amo Macho... #atapontheshoulder #2years

In October last year, Alex Rodriguez had written about scoring an autograph from Jennifer Lopez 20 years ago: "When a big time global pop superstar signed a pic for a young ball player."

While no wedding date has been announced yet, this will be Jennifer Lopez's fourth marriage while it will be the second marriage for Alex Rodriguez.