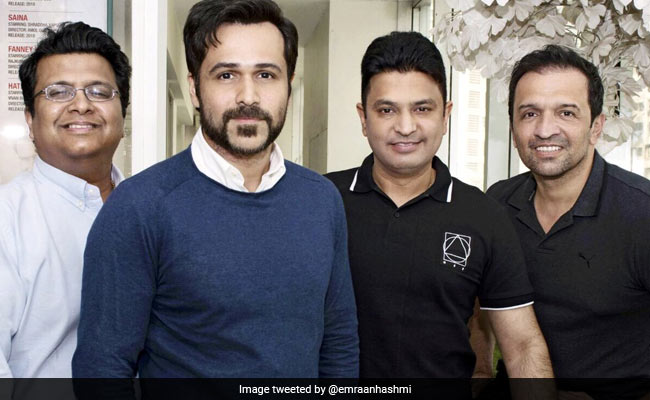 New Delhi: Actor Emraan Hashmi, who was last seen in Baadshaho, will soon star in Cheat India, which is inspired by real incidents on the Indian education system. On Tuesday, Emraan shared the news on Twitter with a picture, featuring himself and the production partners of Cheat India. "Emraan Hashmi Films is delighted to partner with T-Series (Bhushan Kumar) and Ellipsis Entertainment (Tanuj Garg, Atul Kasbekar) on Cheat India, a compelling, edge-of-the-seat drama inspired by real incidents in the Indian education system. To be directed by Soumik Sen and slated for a February 2019 worldwide release," Emraan Hashmi tweeted. In no time, the title of Emraan's new film went viral and is already trending on Twitter.

Emraan Hashmi Films is delighted to partner with T-Series and Ellipsis Entertainment on #CheatIndia, a compelling, edge-of-the-seat drama inspired by real incidents in the Indian education system. To be directed by Soumik Sen and slated for a February 2019 worldwide release. pic.twitter.com/hpkZkKXYhf

Emraan posted the same picture on Instagram and of his upcoming film Cheat India, he wrote: "It is one of the most engaging and riveting scripts I've read in a long, long time." He also added: "The edge-of-the-seat drama will take a startling look at the crimes in the Indian education system which has created a parallel ecosystem infested with a mafia of sorts. I am sure that every student and youth will hugely relate to the subject. In an era marked by the success of content alone, I'm excited to be essaying a character which I believe will be a landmark one in my filmography."

Soumik Sen has earlier directed films like Gulaab Gang, starring Madhuri Dixit and Juhi Chawla. Of his new film, Soumik Sen earlier told news agency IANS: "This film is for every Indian student who is under pressure to excel in a competitive environment. Today's youth will hugely relate to Cheat India."

Emraan Hashmi is star of films such as Murder, Aksar, Raaz - The Mystery Continues,Once Upon a Time in Mumbaai and Raaz 3D. He was last seen in Baadshaho, co-starring Ajay Devgn and Ileana D'Cruz.

Promoted
Listen to the latest songs, only on JioSaavn.com
Cheat India will hit the screens in February, next year.