In the photo posted by Ekta Kapoor, two-year-Laksshya can be seen standing by the baby cot with a gleeful expression on his face. 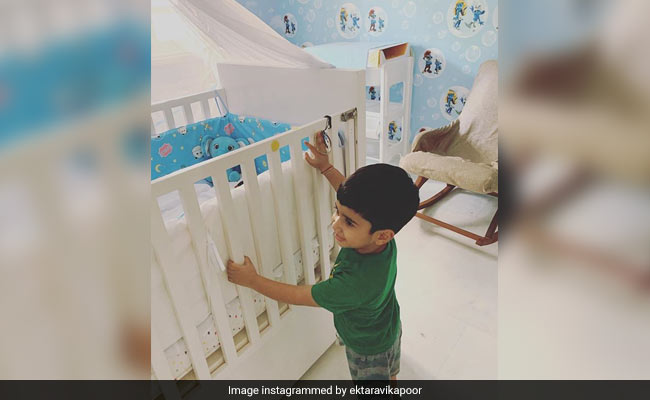 TV czarina Ekta Kapoor is yet to introduce her baby boy Ravie on social media but ahead of that, she Instagrammed an adorable photo of her nephew Laksshya Kapoor. In the photo, two-year-Laksshya can be seen standing by the baby cot with a gleeful expression on his face. "Big brother is watching," Ekta Kapoor captioned her post. The photo has a glimpse of the baby room Ekta has prepared for her son. Lakssya's photo will indeed make you go aww and that's just how celebrities reacted on Ekta's Instagram. Anita Hassanandani and Smriti Irani had no words and reviewed the photo with heart-eyed icons. Sonali Bendre sent out kisses while TV stars like Dalljiet Kaur, Karishma Tanna and others wrote "aww" and "so sweet!"

Ekta Kapoor's new post, featuring Laksshya, is yet another adorable entry to their aunt and nephew diaries.So sweet indeed!

Ekta Kapoor announced the arrival of the youngest member of the family with a heart-warming post on Thursday. Ekta, who became a mother via surrogacy, wrote: "I cannot even begin to express how happy my baby's birth has made me. Everything in life doesn't go the way you want it to but there are always solutions to those hiccups. I found mine and today, I feel immensely blessed to become a parent."

On her Instagram, Ekta Kapoor also shared a statement from her doctor, which explained why she opted for surrogacy:

Thanku doc nandita it's been a 7 year journey!

Ravie Kapoor was born on January 27 but Ekta Kapoor made the baby announcement days later on January 31.

Ekta Kapoor's brother Tusshar had also opted to become a single parent in 2016 through surrogacy. He recently told Zoom TV in an interview that Ekta has been like a mother to Laksshya: "Ekta is a very family-oriented person and has been like a mother to my son Laksshya. This marks the beginning of a new phase in her life, an exciting time of completeness and fulfilment. God bless Ravie with a life of peace, happiness and good health."

Ekta Kapoor was showered with congratulatory messages since she made the baby announcement last week. After Ravie Kapoor's birth, Ekta Kapoor revealed she opted for surrogacy after she encountered failed pregnancies following "multiple cycles of IVF."