Ek Badnaam... Aashram 3: The series, which only sporadically springs to life, banks on unequal battles. The show is, therefore, inevitably, and frequently, left to scramble for devices that can help the sprawling narrative stay on course. 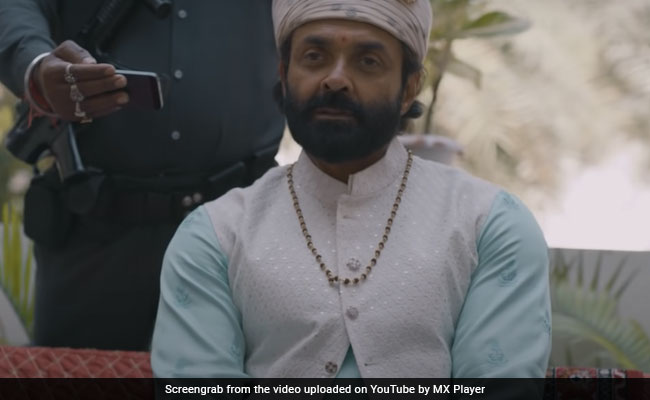 The self-styled godman of Kashipur is back. And so obviously are his depredations helped along by the corrupt cops and malleable politicians he manipulates with absolute impunity. If that sounds like a whole lot of action, tone down your expectations. Season 3 of Aashram, mounted and executed with flair, delivers only in spurts.

Notwithstanding his dissolute ways, the petty criminal-turned-preacher still has a following so huge that the chief minister of the state is at his mercy, the cops are at his beck and call and he can manipulate the administrative and judicial systems the way he pleases.

Baba Nirala is more powerful than ever - he inches ever closer to mutating from a mortal Baba to a miracle-dispensing Bhagwan. Unfortunately, however, the one miracle that the character is in dire need of - a touch of mystery and menace - eludes him.

Surrounded by his raucous and delirious acolytes, he is stuck in a predictable loop. The character is unable to break free from the limitations of a plot that pits him against a bunch of disillusioned followers who would love to see him bite the dust but stand little chance of actually pulling the mask off his face.

Baba Nirala (Bobby Deol) is hard-pressed to capture the aura and intrigue that consistently surrounded him in the first two seasons of Aashram, an MX Player original series. He is far too unbudgingly set in his ways to be able to spring any surprises upon those around him - or upon the audience.

The confrontations between him - more often than not, his principal trouble-shooter Bhopa Swami (Chandan Roy Sanyal) stands in for him - and those that he has either brazenly wronged or treated duplicitously are, barring stray exceptions, tepid. This is despite the fact that director Prakash Jha clearly knows a thing or two about the art and craft of delivering dramatic flourishes.

He peppers the narrative with occasional flashpoints that raise hopes of a 'larger picture' canvas emerging from the story's many meanderings. The faith-politics-police nexus still holds sway over the narrative. The plot also touches upon a case sexual abuse and government-backed land grab and displacement of forest dwellers. These twists and turns that threaten Baba Nirala's empire of evil are, however, at best a trickle.

The performances from Bobby Deol (hobbled somewhat by a lack of room for character development) and Chandan Roy Sanyal, facing a similar problem in the role of the cult leader's ruthless right-hand man Bhopa Swami, are impressively solid despite the fact that all they do is more of what they have already done.

None of the other actors - Aaditi Pohankar, Darshan Kumaar, Tridha Choudhury and Anupriya Goenka (who retreats from the scene hallway through the show) - is able to work their way around the monotony of the tale and carve a clear space for themselves.

Ek Badnaam... Aashram 3, expectedly, hinges squarely on Baba Nirala's illegal activities and sexual predations. It does not give the man's opponents enough leeway to launch a frontal attack on him. His adversaries are forced to work in the shadows. Even when they manage to sneak into his lair, they struggle to cause any real damage.

The mild, ineffectual backlashes against the godman's misdeeds leave the door ajar for another season. It is slated for 2023. The show already seems to have spread itself a bit too thin. It is hard to fathom how another series of episodes could pan out without being caught in a circle of repetitions.

About the only character in the mix who has a certain degree of moral and psychological ambiguity is Tridha Choudhury's Babita, a woman who has paid a heavy price for trusting the pernicious Baba but has clung on and worked her way up in the ashram. One isn't sure what her true intentions are. Has she put her past behind her or is she biding her time for a chance to turn the tables? This season of Aashram does not provide the answer.

Esha Gupta, an addition to the cast, at the midway point of in the 10-episode show in the garb of an internationally renowned branding expert Sonia. She is summoned by the state chief minister Hukum Singh (Sachin Shroff) to work on a lucrative project to refurbish the image of his state and that of the Baba he is in thrall of.

At the outset of Season 3, as a result of the godman's malign machinations, the incumbent chief minister Sunder Lal (Anil Rastogi) has been ousted by the much younger Hukum Singh. The latter is beholden to the ashram and does not lift a finger without the approval of his benefactor. He isn't at liberty to choose his own ministers. Berths in his cabinet have a price tag determined by the ashram.

The suave CM and Sonia, his Oxford University flame, draw up their own plans to try and upstage the charlatan who rules the state from the confines of his ashram, enjoying the fruits of power without responsibility.

Baba Nirala has to reckon with two other key pairs of adversaries. One is Parminder Lochan alias Pammi the wrestler (Pohankar) and her lover Akki (Rajeev Siddhartha), a local journo. The young couple is on the run from the Baba's men. Pammi has been framed for the murder of her father and brother. She is determined to settle scores with the man she once blindly venerated.

Sub Inspector Ujagar Singh (Darshan Kumaar) and his associate in the police force Constable Sadhu Sharma (Vikram Kochhar), another duo looking for an opportunity to take down Baba Nirala, have the backs of Pammi and Akki. They search for ways to bring the fake spiritual guru to book while the ashram inmates close ranks to protect their turf and the godman they swear.

The show spans nearly seven hours, often running low on fuel. No matter how much the victims of the Baba's frauds and misdemeanours try to make him pay for his crimes, they always have their back to the wall. Nirala is way too powerful for them.

Ek Badnaam... Aashram 3, which only sporadically springs to life, banks on unequal battles. The show is, therefore, inevitably, and frequently, left to scramble for devices that can help the sprawling narrative stay on course.