Eid 2020: Kareena And Karisma Kapoor Had An "Insane Lunch" Because "Chef" Saif Ali Khan Made This Dish 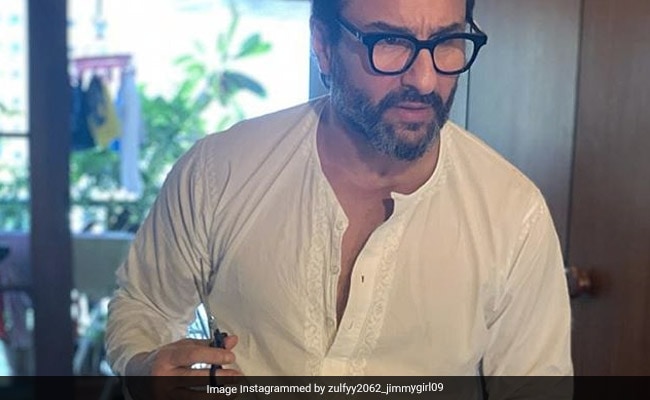 Saif Ali Khan is such a "chef" (courtesy kareenakapoorkhan)

Saif Ali Khan is awesome, be like Saif Ali Khan. A Sunday, Saif switched on his chef mode and hit the kitchen, only to make the entire house smell of delicious mutton biryani, his Eid-special dish. The 49-year-old actor, who loves cooking, treated wife Kareena Kapoor and her sister Karisma to a sumptuous lunch on Sunday and Karisma was kind enough to share a glimpse of her biryani-filled plate on Instagram. "Chef Saifu, best mutton biryani ever! Insane lunch," she wrote in her Instagram story, which was also shared by Kareena on her feed with a few red hearts. Beware. Karisma's "chef" reference is perhaps to Saif Ali Khan's 2017 movie Chef. Directed by Raja Krishna Menon, the movie was a Hindi remake of Jon Favreau's movie Chef, which released in 2014.

The photo shared by Karisma and Kareena will make biryani lovers super hungry: 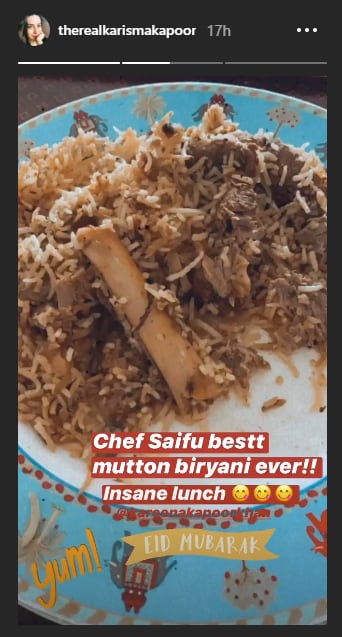 Ahead of chef's release in 2017, Karisma had shared glimpses of Saif Ali Khan exercising his culinary skills in the kitchen along with Karisma and Kareen's cousins Ranbir and Zahan Kapoor. "Our very own master chefs," Karisma had written.

Saif Ali Khan is not known to have social media profiles but makes frequent appearances on Kareena's Instagram. Apart from cooking, Saif is also fond of participating in art and craft activities with Taimur. He is also teaching Taimur the secrets of gardening.

On the work front, Saif Ali Khan was last seen in his year's release Jawaani Jaaneman. Saif will next be seen in Bunty Aur Babli 2, in which he will play the role previously portrayed by Abhishek Bachchan.