Both Disha Patani and Tiger Shroff are fitness enthusiasts 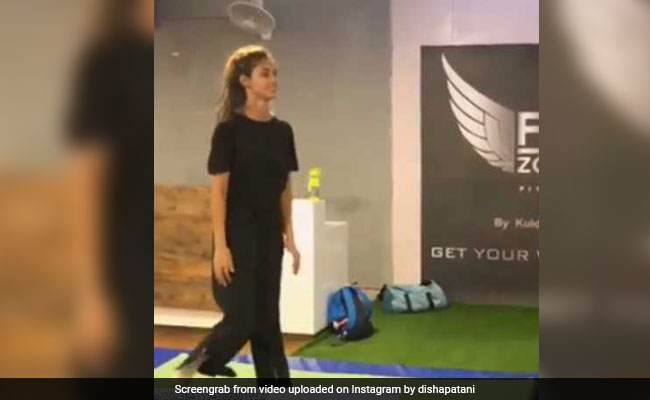 Disha Patani in a still from the video. (Image courtesy: dishapatani)

Disha Patani was doing what she does best on Instagram. The 26-year-old actress posted an adrenaline-laced video of herself showing a few parkour moves (but more about the video later). This is the story of Disha's rumoured boyfriend Tiger Shroff's reaction to the video. Tiger, who has mastered several forms of martial arts himself, left a comment on Disha's post that read: "Easy." Dressed in a black t-shirt and a pair of matching track pants, Disha can be seen trying to do a back handspring and a back layout in the video. The Bharat actress captioned the video: "Training, trying to learn a back handspring and a back layout." Just like us, Disha's Instafam also loved the video and it received over 2 lakh likes within a few minutes. 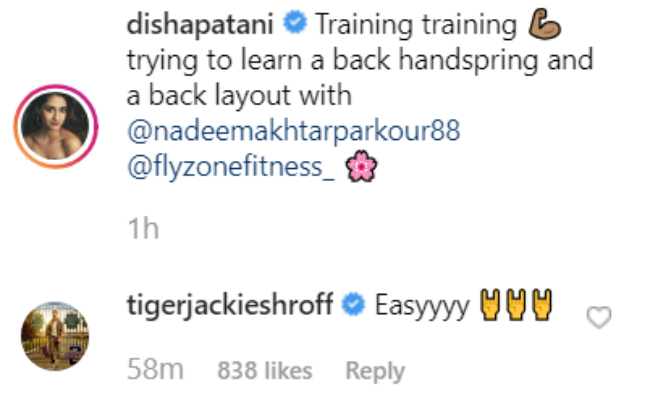 Tiger Shroff and Disha Patani are rumoured to be dating. However, none of them have confirmed their relationship as of now. During his appearance on Karan Johar's talk show Koffee With Karan 6 Tiger addressed Disha as a "great friend" and said, "We both have similar interests and I don't have many friends in the industry. And she's one of the very few friends I have that I am comfortable with."

Disha and Tiger first featured together in the 2016 music video Befikra. The duo also shared screen space in the 2018 film Baaghi 2.

On the work front, Tiger Shroff awaits the release of Student Of The Year 2. He also has Siddharth Anand's untitled project, co-starring Hrithik Roshan in the pipeline.