Drishyam 2 Trailer: Tabu And Akshaye Khanna Have Their Eyes Set On Ajay Devgn's House Of Secrets

Drishyam 2 trailer, as expected, will keep you guessing for more 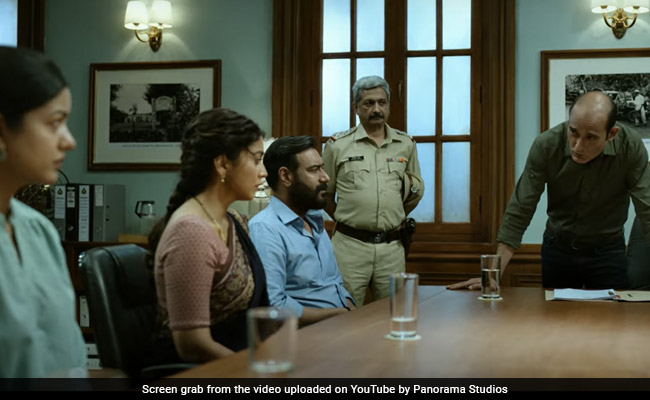 The much-awaited trailer of Drishyam 2 released on Monday and it opened with a monologue by Ajay Devgn, who hints that "truth is like the seed of a tree." He explains that it does come up eventually, no matter how deep you bury it. Ajay Devgn's dialogue might be a cryptic hint and the body of Sam Deshmukh that he buried in the first part of the thriller. A little background for those who require one - Drishyam showcased the story of Ajay Devgn's character Vijay Salgaonkar, who tricked the police after his daughter (Ishita Dutta) accidentally killed the villainous son of a cop (played by Tabu). Back to the the second installment's trailer - 7 years have passed and the cops are still investigating the case and are after Vijay Salgaonkar and his family. Enter a new player in the scene - Akshaye Khanna, who admits that "Vijay Salgaonkar is a smart man." He does seem to know a thing or two about the incident. But there is no evidence to back the case. Tabu as IG Meera Deshmukh is back in the picture and this time she won't let go of Vijay Salgaonkar and his family. She is hell bent on finding the truth behind her son's mysterious (at least to her) death.

Things will only unfold when the case reopens on November 18 - the film releases in theatres on that day.

Check out the trailer of Drishyam 2 here:

Drishyam 2 has been directed by Abhishek Pathak and produced by T-Series and Panorama Studios and it will release in theatres on November 18. Other than Akshaye Khanna, Ajay Devgn and Tabu, the film also stars Shriya Saran and Ishita Dutt in pivotal roles. The film was a Hindi remake of the hit Malayalam hit that featured Mohanlal in lead role.