Drishyam 2 Review: On the acting front, Ajay Devgn strides through Drishyam 2 with confidence. But Akshaye Khanna is a bundle of mannerisms. 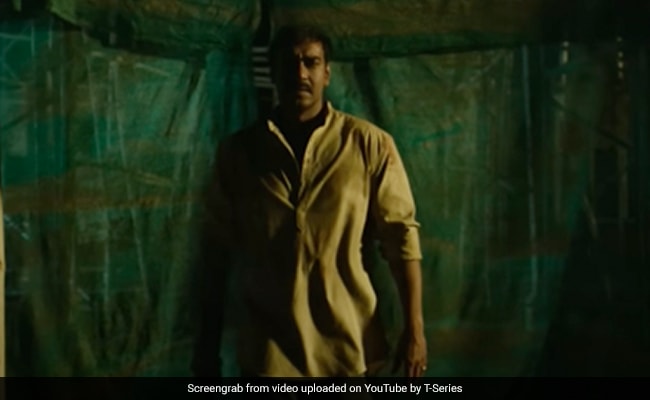 We all know what Vijay Salgaonkar was up to the last time around. He is back with more of the same, juggling with crucial evidence that might help the police bring him to book. But Drishyam 2 cannot be the humdinger that it aspires to be because all its key secrets are out in the open.

The 2021 sequel to the original Malayalam-language Drishyam (2013) has been on a streaming platform for well over a year now. The whole world is aware that the Salgaonkar family's troubles are far from over. The cops are sniffing around again and Vijay has to pull out the stops to stop the ferreting lawmen.

Drishyam 2, a 140-minute sequel that is both inevitable and wholly gratuitous, shows us why and how Vijay Salgaonkar throws caution to the wind as the cops close in on him seven years on with the aid of an accidental witness, a limited-run book, and two undercover cops.

No matter how technically competent this scene-to-scene Hindi rehash is, Drishyam 2, adapted by Aamil Keeyan Khan and director Abhishek Pathak from Jeethu Joseph's original script, struggles to excite and intrigue. Having spawned innumerable versions in a range of languages, the story of the cable operator turned movie exhibitor and his family holds no surprises at all.

Twists, turns and trickeries play their inevitable part but produce no real magic. We are privy to what is going on in the protagonist's mind and what is unfolding in and around his home. It is, therefore, easy to be a step ahead of him - and the film - at all times.

Lead actor Ajay Devgn does not fall short in a role that requires him to continue to be his surly and secretive onscreen self. The hero's movie theatre is thriving and he is now prosperous enough to hire a screenwriter and plan a foray into film production.

All seems to be going well for Vijay when the new inspector-general of Goa Police Tarun Ahlawat, played by Akshaye Khanna, arrives in Pondolem. At his behest, the case that the Salgaonkars believed was behind them for good is reopened with some prodding from ex-IG Meera Deshmukh (Tabu), who is in town for the annual memorial service for her dead son.

The reinvigorated police probe into the murder of teenager Samir Deshmukh puts the Salgaonkar family back under the scanner, compelling Vijay to go into overdrive to deflect the needle of suspicion and mislead the cops into a cul-de-sac.

The problem with Drishyam 2 is that the stratagem that Vijay Salgaonkar devises in order to stall the police from getting to the bottom of the truth that is buried in the unlikeliest of places hinges on a rather arbitrary, convenient and heavy-handed manipulation of men susceptible to the lure of money and false hopes.

Vijay's self-preservatory moves in the sequel are not in the same league in terms of the level of sly intelligence as the ones that he resorted to in Drishyam 1 as he went about creating a web of effective alibis to evade legal punishment. In this follow-up, since the audience is aware that Vijay will go scot-free yet again and that the plans of the police aimed at trapping the Salgaonkars are doomed to failure, there isn't much to keep us hooked.

Nandini Salgaonkar (Shriya Saran) frets endlessly and sports a perennially startled look - a response to her husband's insistence that she stay mum at all cost about what happened seven years ago. Her epileptic elder daughter Anju (Ishita Dutta) is forever on the verge of a relapse in the face of the pressure that is increasingly mounted on them. Vijay is a tough nut to crack, but the rest of the family is markedly vulnerable.

The need to conceal their dark truth come what may pushes Nandini and her daughters into unsettling situations, one of which is sparked by a visit by the IG of Police that catches them unawares and exposes the depth of the distress that the three women have to deal with as matters spiral out of control.

Tarun Ahlawat sets the cat among the pigeons. Vijay is of course no ordinary pigeon. It is hard to ruffle his feathers. "Dil aur dimaag ke beech mein maine hamesha dimaag ki suni hai (Between the heart and the head I have always paid heed to the latter)," he states matter-of-factly when his wife suggests that it is probably time for the couple to make a clean breast and face the consequences of the confession. That, Vijay asserts, is not going to be an option. His dimaag will still trump his dil.

Admittedly, fans of Drishyam are legion. This critic isn't one of them. Embedded in its 'clever' plot is an unabashed glorification of a man who will do whatever it takes to save his family - morality be damned. It is akin to suggesting that no matter how many lines one crosses any act is acceptable as long as its purpose is to protect one's own against inimical forces. Doesn't that notion form the very basis of fascism in the larger context of human behaviour?

Manipulation of the law is one thing, but holding up a man who revels in trifling with justice as someone worth emulating is problematic, to put it mildly. Drishyam rests on two specious (and spurious) planks. One would have us believe that consuming a lot of movies can arm a person with uncommon sharpness of mind. This supposition is especially dangerous at a time when real-life criminals routinely draw inspiration and ideas from filmed fiction (one has to go no further than yesterday's newspaper for an example).

The other confers legitimacy on dodgy moral choices. This isn't smart writing; it is warped thinking. Yes, contrivances of the kind we see in Drishyam do take some doing. To that extent, the creators of the film and its sequel can claim some credit.

On the acting front, Ajay Devgn strides through Drishyam 2 with confidence. But Akshaye Khanna is a bundle of mannerisms. There is little in his overly affected performance that can put Murali Gopy's interpretation of the character in the shade. The rest of the cast go along without feeling the need to push their roles in new directions.

Drishyam 2 is shorter than the original and thinks up a few cosmetic changes. Yet, it is at best a dreary, if steady, carbon copy with only a stray line here or an insignificant stroke there that might be deemed somewhat fresh. Not enough to hold the film together.