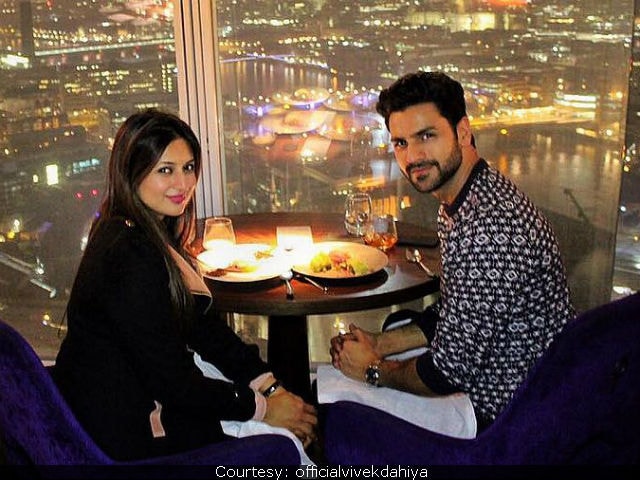 New Delhi: Star couple Divyanka Tripathi Dahiya and Vivek Dahiya have flown down to Goa for post-Valentine's Day celebrations. Vivek shared some pictures on Instagram and captioned one of them as: "Greetings from Goa!" This was Divyanka and Vivek's first Valentine's Day as Mr and Mrs. The couple got married in July 2016 in a lavish ceremony in Bhopal, Divyanka's hometown. A doting husband Vivek earlier told Hindustan Times that he wanted the V-Day celebrations to be more special as it is their first after marriage. He said, "Last year on Valentine's, we were in Sri Lanka. This time, I needed to up my game. We were just engaged last year, but now that we're married, I wanted to make it more special. There is no better place than Goa for a two-day getaway. I'm looking forward to spending some quality time with Divyanka."

Check out these pictures of Mr and Mrs Dahiya:

When the sunset was so alluring but the Mrs. decides to capture me instead

Divyanka, who was oblivious of Vivek's plans told Hindustan Times, "He has a way of giving these surprises. I don't know what's in store, but I'm absolutely looking forward to it."

Divyanka and Vivek both 32, went to Europe for their honeymoon in December-January. Right after marriage, the couple went for a brief trip to Udaipur as their work schedule didn't allow them for a long trip.

Promoted
Listen to the latest songs, only on JioSaavn.com
Here are some pictures of Divyanka and Vivek from their honeymoon diaries:

#Honeymoon #Boat #Breeze... A perfect recipe for #TitanicPose! How could we not do it!

A post shared by Divyanka Tripathi Dahiya (@divyankatripathidahiya) on Jan 3, 2017 at 3:42am PST

A post shared by Divyanka Tripathi Dahiya (@divyankatripathidahiya) on Dec 30, 2016 at 7:16pm PST

A post shared by Divyanka Tripathi Dahiya (@divyankatripathidahiya) on Dec 28, 2016 at 5:26pm PST

Divyanka Tripathi and Vivek Dahiya are television's top-rated stars. They married on July 8 in Bhopal. The wedding was followed by a reception in Vivek's hometown Chandigarh. The couple first met on the sets of Yeh Hai Mohabbatein, in which Divyanka is the lead actress. Vivek currently plays the lead in Ekta Kapoor's Kavach...Kaali Shaktiyon Se.