Disha Patani's Prep For Bharat Will Give You A Kick

Disha Patani's fans referred to her as "Lady Tiger," in the comments section 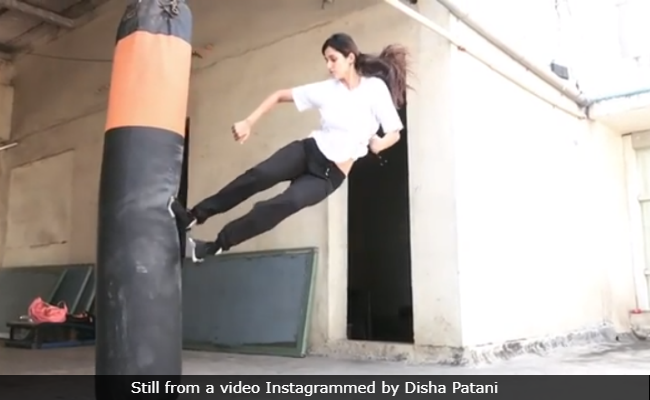 Disha Patani in a still from the video. (Image courtesy: dishapatani)

Actress Disha Patani, who will be seen playing the role of a trapeze artist in her upcoming film Bharat, is busy prepping for the role. How, you ask? Well, for those who don't know, we must tell you that we are referring to Disha Patani's latest Instagram video, in which she can be seen showcasing some great high velocity dropkicks. Disha shared the video with her 13.9 million followers on Instagram, of which over 4 lakh fans have liked the video within an hour. Disha captioned the post: "Dropkick, just chilling" and added the hashtag "Bharat the film." While some fans seemed to be smitten by the actress' moves, another section of the Internet, made a subtle reference to the actress' rumoured boyfriend Tiger Shroff (who has also mastered several forms of martial arts) and wrote comments like "Lady Tiger" and "she is a perfect tigress."

Disha Patani is often seen sharing pictures and videos from his work out sessions on social media. The actress' work out routines are not merely confined to core exercises but also include Pilates and Parkour. A few months ago, she shared a video, in which he could be seen showcasing some great parkour moves. ICYMI, check out the video here:

Disha will be seen showcasing some high-octane action moves in Bharat. The actress, who will be seen playing the role of a trapeze artist in the film co-starring Salman Khan, in an interview with news agency IANS, earlier this year, said, "We are doing different scenes and action. It has been really nice and it has been really great."

On being a part of Ali Abbas Zafar's film, Disha said that she feels "lucky" to be a part of Bharat and considers it to be a "blessing" of God. "I feel lucky to be a part of Bharat. I think it's a blessing of God, and the love and support of my family and followers that I am getting to do some good and interesting work. Eventually, everything depends on your hard work."

Bharat is a Hindi remake of the 2014 South Korean movie Ode To My Father. Besides Salman Khan and Disha Patani, the film also features Katrina Kaif, Tabu, Nora Fatehi and comedian Sunil Grover. Bharat is slated to release on Eid next year.

Disha Patani made her Bollywood debut with the 2016 film MS Dhoni: The Untold Story. She was also a part of films such as Kung Fu Yoga and Baaghi 2 alongside her rumoured boyfriend Tiger Shroff.