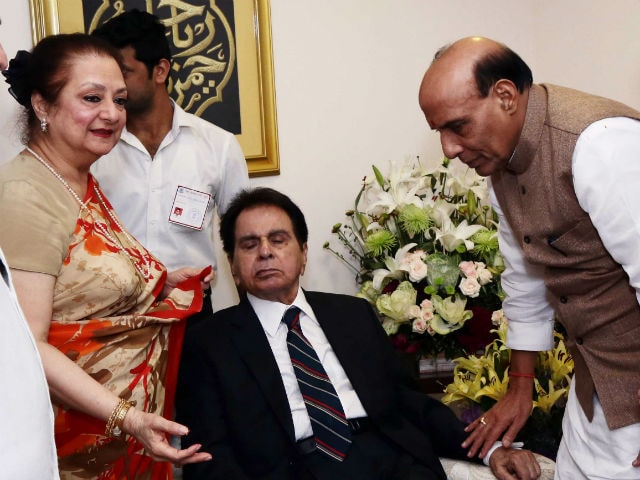 Dilip Kumar and Saira Banu with Rajnath Singh in Mumbai.

The 93-year-old actor was presented a medal, a certificate and a shawl by Singh, in the presence of the actor's wife Saira Bano. Maharashtra Governor C Vidyasagar Rao, Chief Minister Devendra Fadnavis were among other dignitaries present at the actor's home when he received the award.
Image courtesy: ANI
The announcement to honour actor Dilip Kumar, Amitabh Bachchan and a few others with the prestigious Padma Vibhushan was made by the government on January 25, 2015.

However, Dilip saab, due to ill-health could not attend the special function held at the Rashtrapati Bhavan in April when other Padma awardees were honoured by President Pranab Mukherjee.

Born as Muhammad Yousuf Khan in Peshawar, Kumar made his debut as an actor in the film Jwar Bhata in 1944 produced by Bombay Talkies.

The Government of India honoured him with the Padma Bhushan award in 1991, the Dadasaheb Phalke Award in 1994 and the Padma Vibhushan earlier this year, for his exceptional and distinguished contribution to the Indian cinema.