Dhoop: It's Another Day Of Sun For Siddhant Chaturvedi In His New Song

Dhoop: "Put your headphones and sunglasses on, it's a vibe," wrote Siddhant Chaturvedi 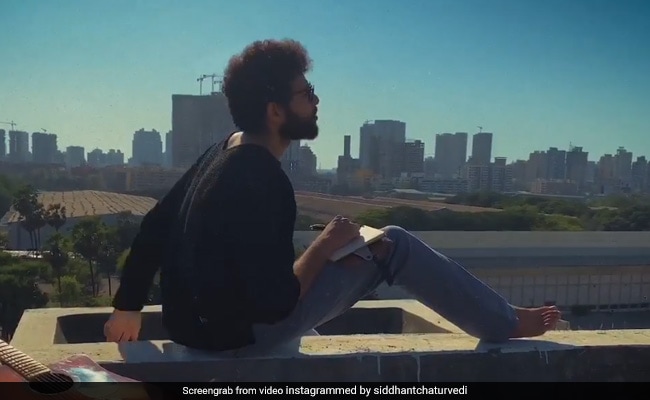 Siddhant Chaturvedi in a still from Dhoop. (courtesy siddhantchaturved i)

Gully Boy star Siddhant Chaturvedi released his new song Dhoop on Thursday and let's just say it is pleasant in every possible way. As the name suggests, the song is all about a sunny day and those little things in life. Through the course of the video, Siddhant is seen chilling on a sunny day on his terrace, lost in reverie as he stands by his window with a mug in his hand. Our personal favourite segment in the video is when Siddhant raps. Sharing the video, Siddhant wrote on his Instagram profile, "Put your headphones and sunglasses on, it's a vibe." The poetry and vocals are by Siddhant Chaturvedi and the music has been composed by Dawgeek. Abhishek Sharma has edited the video and it has been produced by Farhan Akhtar and Ritesh Sidhwani's Excel Entertainment.

Put your Headphones and Sunglasses on, It's a vibe . . . Poetry and Vocals by Siddhant Chaturvedi Music Composed and Produced by @dawgeek Editor - Abhishek Sharma @abhishek4reel Animation and Packaging - @XXWatts

Meanwhile, Karan Johar reviewed Siddhant's video in his tweet and wrote: "Wow! Dhoop The breakthrough of a new musical talent! What a trippy beautifully composed and written song Sid! Sher talent! This one's for the charts."

Wow! #DHOOP The breakthrough of a new musical talent! @SiddhantChturvD ! What a trippy beautifully composed and written song Sid! Sher talent! This ones for the charts!!!! https://t.co/DblgpDmxLg

Nothing can block our Sunshine... Here's sharing the First Look of my music video #DHOOP @dawgeek @excelmovies

A post shared by Siddhant Chaturvedi (@siddhantchaturvedi) on Jun 3, 2020 at 7:39am PDT

Siddhant Chaturvedi became a household name after he played the role of MC Sher in Zoya Akhtar's Gully Boy. He stepped into the Indian entertainment industry with the 2016 web-series Inside Edge. He has also been a part of the web-series Life Sahi Hai. The actor also dubbed for the Hindi rendition of Men In Black: International.