Esha Deol posed with Dharmendra for a happy picture and accompanied it with a heart-warming caption. 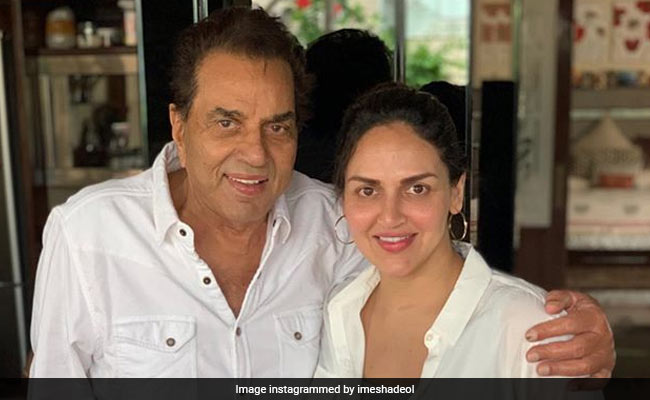 And just like that, Esha Deol filled up her Instagram page with a whole lotta dad love by posting a picture of herself with her actor father Dharmendra. Esha Deol, dressed in a classic white and blue combo, was twinning with her father and they were all smiles for the picture. "A daughter may outgrow her father's lap... but she'll never outgrow his heart," Esha captioned the post. Esha's Instafam showered love and best wishes in the comments thread. "So cute," wrote a fan while another added, "May you always be with your daddy ji."

Esha Deol is the elder of Dharmendra and Hema Malini's two daughters. Esha, unlike her sister Ahana, took up her parents' profession and she debuted in film in 2003 with Koi Mere Dil Se Poochhe. She followed it up with movies such as Na Tum Jaano Na Hum, Dhoom, LOC Kargil, No Entry, Kaal, Just Married and Tell Me O Kkhuda to name a few.

Esha Deol is also a classical dancer like her mother and sister and she has performed several solo recitals and some with her mother too.

Esha Deol, married to businessman Bharat Takhtani, is the mother of two daughters - Radhya, 1, and Miraya, who was born in June 10. After marrying Bharat Takhtani, Esha gradually moved out of the film space and she returned with short film Cake, which released last year. As of now, Esha Deol hasn't announced her next project.