Dhamaka Review: Despite Kartik Aryan's Panache, Takedown Of Indian Journalism Is More A Whimper Than A Bang

Dhamaka Raview: Kartik Aaryan fleshes out a believable television news anchor desperately seeking to regain his lost glory, conveying the restiveness and resolve of a man determined to go for broke no matter what. 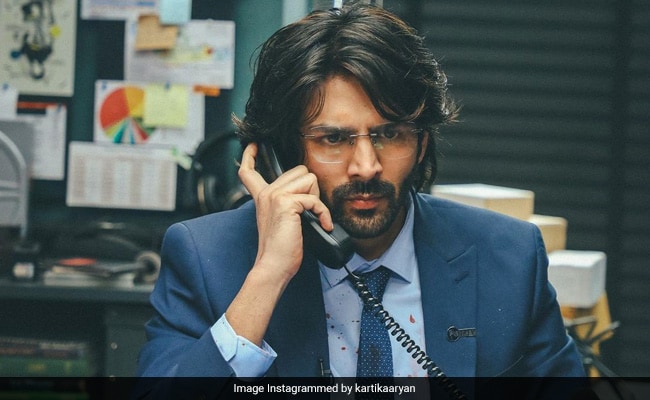 Dhamaka: Kartik Aaryan in a still from the film. (Image courtesy: kartikaaryan)

Ram Madhvani, a filmmaker of proven talent who has a film like Neerja and a web series like Aarya behind him, uses Dhamaka to mount a frontal and absolutely tenable attack on what most news channels dish out in a fact-free world in the name of journalism. The darts, however, are wayward at times and do not hit the target with the required power and precision.

Dhamaka, an RSVP production now streaming on Netflix, is a faithful remake of the 2013 South Korean thriller Deo Tereo Raibeu (The Terror Live). Unfortunately, the result - a film that unfolds in the confines of a Mumbai news studio through the means of a conversation between a television anchor and a man in a deep, destructive funk - is more a whimper than a bang.

That is a pity because Dhamaka is a well-crafted film that makes the right noises (if only a tad too loudly occasionally) about the 'business' of news and, just as important, about the underclass that toils to build our bridges and high-rises but goes unrecognized and unrewarded.

Moreover, lead actor Kartik Aaryan carries the weight of Dhamaka on his shoulders with admirable panache. He fleshes out a believable television news anchor desperately seeking to regain his lost glory, conveying the restiveness and resolve of a man determined to go for broke no matter what.

With so much going for it, why is Dhamaka not quite as explosive as it should have been? Like the bridge that is under a terror attack, much of the promise that the plot holds tends to go up in smoke. The reason is that the film's takedown of contemporary Indian journalism lacks subtlety. It falls back on all too literal swipes at purveyors of sensationalism and leaves nothing unsaid.

Sach (truth) is a word that is liberally used in the course of the film as a contrast to all the noise that is sought to be passed off as news from the studio space that the film plays out in. But even after this pivotal point has been rubbed in ad nauseum, the script insists on continuing to harp on it and loses its way in a humdrum loop in the process.

The 'hero', Arjun Pathak (Kartik Aaryan), a young prime-time news anchor, is at the end of his tether. His career has hit the skids - the reason for his demotion is revealed much later in the film - and his field reporter-wife Saumya (Mrunal Thakur in a special appearance) has filed for divorce. The professional slump and the personal crisis, it turns out, are interlinked.

When all seems lost, an unlikely opportunity presents itself on a routine Sunday morning. Arjun grabs it with both hands knowing full well that he has no way of actually be sure of the consequences of his move.

A man threatens to blow up the Mumbai Sea-Link and calls in to let radio show host Arjun Pathak know what he is up to. Yes, the ambitious guy, having lost his prime-time TV slot, is now an RJ. He dismisses it as a prank call. He is mistaken. A bomb explodes on the bridge, just as the caller had threatened.

Arjun realizes he has an exclusive breaking story on his hands, convinces his boss (Amruta Subhash, playing a role outside her comfort zone) to send down a camera unit to the radio station level, becomes a TV news anchor again, and begins to negotiate with the terrorist - a disembodied voice who identifies himself as Raghubeer Mhata, a humble construction worker shortchanged by the nation - live on air.

"Jo bhi kahunga sach kahunga (I will speak the truth and only the truth)," Arjun intones every time the show resumes after a break. You nearly expect him to go on and say sach ke siwa kuch nahin kahunga, his hand on a Holy Book.

It, however, does not take him particularly long to conclude that audience ko drama chahiye, channel ko ratings chahiye, sach (yes, that word again) kisiko nahi chahiye. That is the nub of the film's principal argument. It takes several bomb blasts and exploding earpieces (the mystery around them is never fully explained) for it to be heard.

If you still haven't heard it, there is a moment late in the film when Arjun asks his cynical boss: Yeh sach nahin hai (So this isn't the truth)? The lady's reply is prompt: Haan, yeh news hain (Yes, this is the news)!

That is the thrust of Dhamaka - no matter what the world might think and need, news is meant for a captive, gullible audience willing to buy the hype and hoopla served by shrill newsreaders. The terrorist who believes that a television anchor is somebody who will speak up on his behalf and help him convey his demand to the people in power is no exception. He is no different from the consumers that Arjun Pathak addresses: he has complete faith in the face in the studio.

Arjun's superior, who herself is angling for a better deal in the company and hopes to score big on that front with the latest breaking story that she wants to guide towards "an emotional patriotic ending", and an anti-terrorism unit man (Vikas Kumar) keep firing instructions at Arjun Pathak until he has had enough. Pushed to the edge, he decides it is best not to heed anybody's orders.

The man who holds the city to ransom in Dhamaka isn't you're your average terror-monger. He isn't waging a war on the majority community and the security forces. He has been wronged by the system and left to his own devices. He simply wants the nation to sit up and take notice of the plight of citizens of his ilk: powerless and voiceless. He has a personal grouse.

The anchor, too, isn't without a personal stake in the incident. Saumya, his estranged wife, is on the spot reporting on the developing situation at great risk to her life. Arjun takes the task of talking Raghubeer out of his plans upon himself.

The film does throw up a few tense moments and some surprises along the way but, despite what is at stake, is overall a rather tepid affair. The surface veneer of Dhamaka does not quite percolate any further.