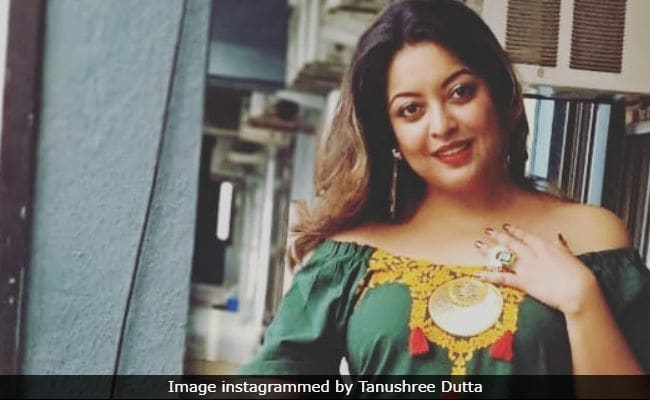 A defamation case has been filed against actress Tanushree Dutta in Maharashtra for her comments against Raj Thackeray, chief of Maharashtra Navnirman Sena (MNS), reports news agency PTI. A case was registered based on a complaint lodged by MNS' Beed district unit president Sumant Dhas, who alleged that Ms Dutta had defamed Raj Thackeray, a police officer told PTI. "We have registered a non-cognisable offence against Dutta under Section 500 (defamation) of the Indian Penal Code and are investigating the complaint. We have also asked the complainant to approach court," the officer was quoted as saying.

Recently, Tanushree Dutta named and shamed actor Nana Patekar for sexually harassing her on the sets of a film in 2008. In her explosive interviews about the decade-old allegation, Ms Dutta also claimed that goons from MNS attacked her car and vanity van at Nana Patekar's behest after she walked out of the project. An old video of Ms Dutta's car mobbed while exiting a film studio recently went viral.

In subsequent interviews, Ms Dutta allegedly said that 'Raj Thackeray wanted to succeed late Bal Thackeray as Shiv Sena chief, but could not do so,' reports PTI. Over the weekend, Ms Dutta added that she received fresh threats from the members of MNS. "MNS party in an interview given to a leading daily has threatened me with a violent attack," Ms Dutta told ANI. On Wednesday, Maharashtra home minister Deepak Kesarkar also revealed that Tanushree Dutta was given protection but not against Nana Patekar, who he described as 'an actor and very well-known social worker.'

On Thursday, Tanushree Dutt also told ANI that she has received two legal notices one each from Nana Patekar and filmmaker Vivek Agnihotri - she alleges he asked her to strip off camera on the sets of a film. "This is the price you pay for speaking out against harassment, humiliation, and injustice in India," she told ANI.

In other news, members of the youth wing of MNS sent a signed letter to the makers of Bigg Boss 12 over Tanushree Dutta's rumoured participation in the reality show. They've threatened violence on the sets in Lonavla if she was signed for the show. Actress Swara Bhasker outraged over a picture of the MNS members handing over the aforementioned letter to the showrunners circulating on social media.